"The resistance will continue through peaceful means, and we will not call for anything else,” Palestinian leader said. 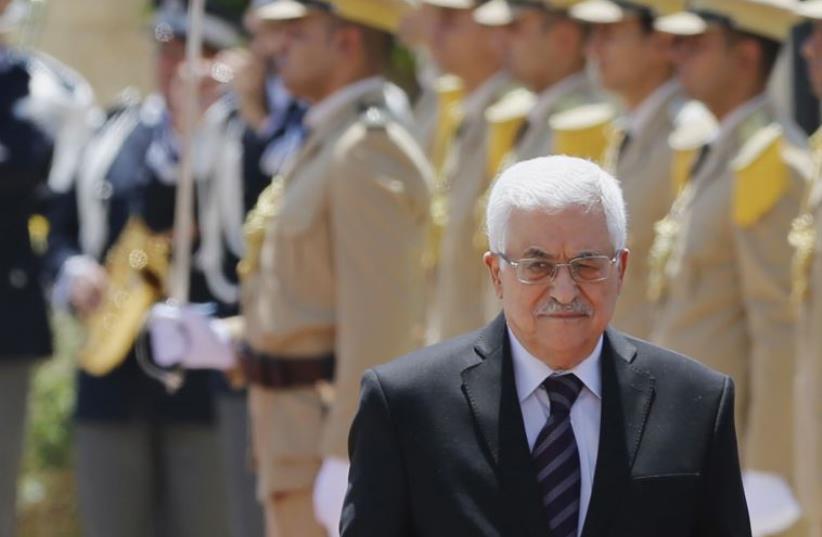 Palestinian President Mahmoud Abbas walks with Italy's Prime Minister Matteo Renzi (unseen) as they review the honor guard in the West Bank city of Bethlehem
(photo credit: REUTERS)
Advertisement
In his first public comments since the brutal murder of an Israeli woman in the West Bank settlement of Otniel on Sunday, Palestinian Authority President Mahmoud Abbas said on Monday that he was opposed to violence and killing of anyone irrespective of their ethnic or racial background.“We are concerned over every drop of blood from any person,” Abbas said.During a speech that was broadcast to Palestinians from the Church of the Nativity, Abbas vowed that “the resistance will continue through peaceful means, and we will not call for anything else.”“We will stand firm on our land, and we will stay the course despite the desperation and in spite of the fact that Israel’s leadership is trying to close every door to peace,” the Palestinian leader said. Abbas said that the Palestinians would appeal to the international community for protection against “the killing and daily executions so that we can put an end to the amoral and inhumane steps being taken against us by Israel.”Security forces arrested a Palestinian minor overnight on suspicion of carrying out the stabbing murder of Dafna Meir, a mother of six, on Sunday in Otniel.The suspect is a 16-year-old resident of a village near Otniel, and has been taken for questioning, the Shin Bet said.The arrest came following intelligence and operational activities by the domestic intelligence agency.On Monday, a Palestinian terrorist stabbed and moderately wounded a 30-year old pregnant woman in the industrial zone of the West Bank settlement of Tekoa.Monday's victim, Michal Froman, was in a clothing warehouse at the time of the attack.An armed civilians fired on and shot the attacker, critically wounding him.Magen David Adom paramedics evacuated Froman to the Shaare Zedek Medical Center in Jerusalem. She suffered from a stab wound to her upper body.Prime Minister Benjamin Netanyahu visited Otniel on Tuesday morning and slammed the Palestinian Authority for the incitement that propelled a 15-year-old boy to Meir.“There is on the one side humanity and a desire for coexistence, and on the other side boundless hatred,” he said, after paying a shiva call on the Meir family. “That hatred has an address,” Netanyahu said. “It is the incitement of the Palestinian Authority and other actors such as the Islamic Movement and Hamas. The time has come for the international community to stop its hypocrisy and to call the child by its name.”Netanyahu, accompanied on his visit by Defense Minister Moshe Ya'alon, said the root of the conflict is the Palestinian refusal to “recognize the right to the Jews to have a state in any borders – here, in Tel Aviv, anywhere,” he said. He said this “truth” must be told to the world, and that in the end “the truth will win out.”In addition to meeting with the Meier family, Netanyahu and Ya'alon received a security briefing from senior IDF officials and met with the head of the Hebron Hills regional Council, Yohai Damari.Abbas, however, adhered to his claim that the Palestinians eschew violence.“The Palestinians will realize their right and establish Palestine with its capital in east Jerusalem through peaceful means and diplomacy,” the Palestinian leader said. “When we speak of settlements, now all of Europe sees them as illegitimate, together with their products.”The European Union reinforced on Monday its position that products made in Israeli settlements must be clearly labelled in Europe, despite growing tensions with Israel over the issue, but stressed that the bloc opposes any boycott of the Jewish state.EU foreign ministers said the guidelines on labels for farm and other products, which were unveiled in November and branded discriminatory by Israel, were there to explain EU law and did not mark a change in the European Union's long-held opposition to Israeli settlements."The EU and its member States are committed to ensure continued, full and effective implementation of existing EU legislation and bilateral arrangements applicable to settlements products," ministers said in a statement.Ministers reiterated the EU's position that the lands Israel has occupied since the 1967 Middle East war - including the West Bank, East Jerusalem and the Golan Heights - are not part of the internationally recognized borders of Israel.As such, goods from there cannot be labelled "Made in Israel" and should be labelled as coming from settlements, which the EU considers illegal under international law.Herb Keinon, Yaakov Lappin, and Reuters contributed to this report.