Israel would be expected to freeze settlement construction as part of steps toward normalizing ties. 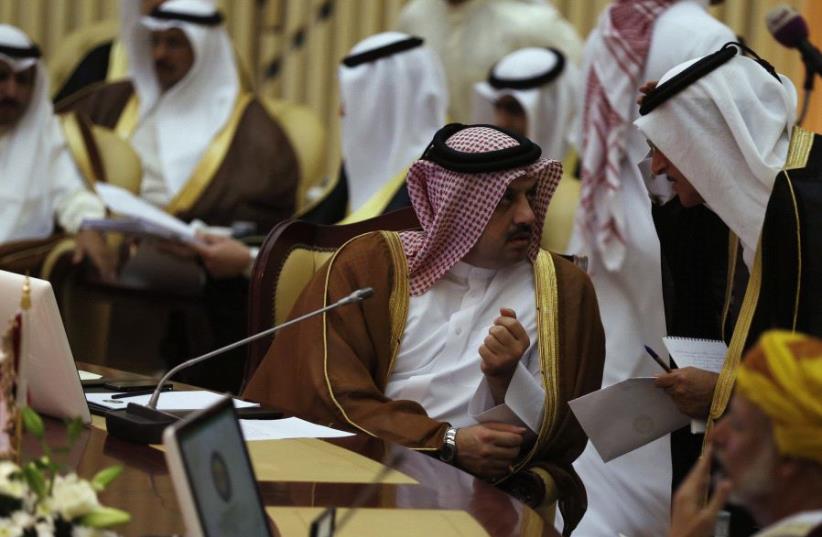 A meeting of the Gulf Cooperation Council in Riyadh [File]
(photo credit: REUTERS)
Advertisement
Various Arab Gulf nations are reportedly prepared to improve ties with Israel if Jerusalem takes what they deem as significant efforts to relaunch the stagnant peace process with the Palestinians, The Wall Street Journal on Monday cited sources close to the matter as saying. As part of the normalization process, the Gulf states would reportedly be willing to set up telecommunication lines between the countries, allow for Israeli businesses to trade with their Arab counterparts and allow for Israeli planes to fly over their airspace. In return, Israel would have to freeze settlement construction and relax trade restrictions with the Gaza Strip.The report emerged a week before US President Donald Trump is due to make his first visit to the region. Trump's first foreign trip as president will include stops in Saudi Arabia, Israel and the Vatican. Trump was due to convene Arab world leaders from across the region alongside Saudi royal family members in Riyadh. In Jerusalem, the president was expected to offer details for the first time on his vision for a comprehensive Israeli-Palestinian peace. He will then go on to meet Pope Francis at the Vatican. In late March, sources told The Jerusalem Post that members of the Trump administration are exploring whether to host a landmark conference over the summer that would bring Gulf Arab leaders, the Palestinian Authority president and Israel’s prime minister onto the same stage for the first time.No event has been formally planned, and additional sources from both Israel and the US deny that a summit is the purpose of a recent flurry of American diplomatic activity in the region. But several discussed the idea as a concrete goal of an administration seeking a momentous foreign policy victory.
Netanyahu says Arab countries increasingly see Israel as an ally (credit: PMO)
Prime Minister Benjamin Netanyahu in recent months has alluded to the normalization of ties with moderate Arab states in the region.In March, he spoke of the threat that Iran poses to the region, asserting that efforts to counter Tehran could open doors for Israel to establish relations with more Arab countries other than Egypt and Jordan, with which Jerusalem already has ties.“I believe in nurturing these interests,” he said. “In my opinion, if we act wisely, it could assist us normalizing ties with countries in the region and opening new diplomatic streams – that could be more efficient – between us and the Palestinians.”

Michael Wilner and Udi Shaham contributed to this report.