The 'Al Quds' newspaper reported that Hamas authorities in Gaza are searching for the people trapped in the tunnel collapse. 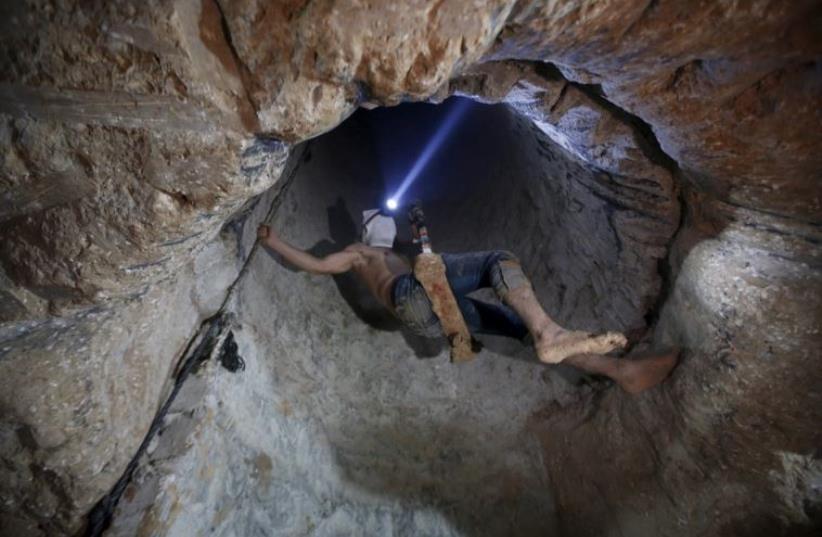 A Palestinian worker is lowered on a rope into a smuggling tunnel that was flooded by Egyptian security forces
(photo credit: REUTERS)
Advertisement
A Palestinian newspaper is reporting on Sunday that at least five members of Hamas’ military wing were injured when a tunnel they were in collapsed underneath the Gaza Strip, Israel Radio said.The radio network cited a report on the website of Al Quds which said that a Hamas-built tunnel collapsed in the Zeitoun quarter of southeastern Gaza City. There has yet to be official confirmation of the report.The newspaper reported that Hamas authorities in Gaza are searching for the people trapped in the tunnel collapse.If the report is accurate, it would mark the fifth time in recent weeks that a tunnel built by Islamist forces in the Gaza Strip crumbled.Earlier this month, a Hamas operative was killed in a tunnel collapse in southern Gaza's Khan Younis region, according to Palestinian sources.A Gaza health ministry spokesman confirmed the reports, saying Marwan Marouf, 27, a fighter in Hamas' Izzadin al-Kassam Brigades, was killed in the tunnel collapse.Days before, Hamas officials confirmed the death of at least two of its operatives in a tunnel collapse. In the week prior to that incident, seven Hamas men were killed when a tunnel collapsed close to Gaza's eastern border with Israel. Last month, Ismail Haniyeh, the Hamas deputy political bureau chief, vowed that his group will never stop digging tunnels and upgrading rockets in preparation for any possible confrontation with Israel.Last week, Haniyeh said that the Islamist movement’s military wing discovered sensors, cameras, and other surveillance equipment in one of its tunnels underneath the Gaza Strip.The Hamas leader said that the gadgets found by the Izzadin al-Kassam brigades were planted there in an effort to discover more tunnels.