Chinese special envoy to the Middle East, Gong Xiaosheng, made the remarks during a meeting Monday night with PA President Mahmoud Abbas in Ramallah. 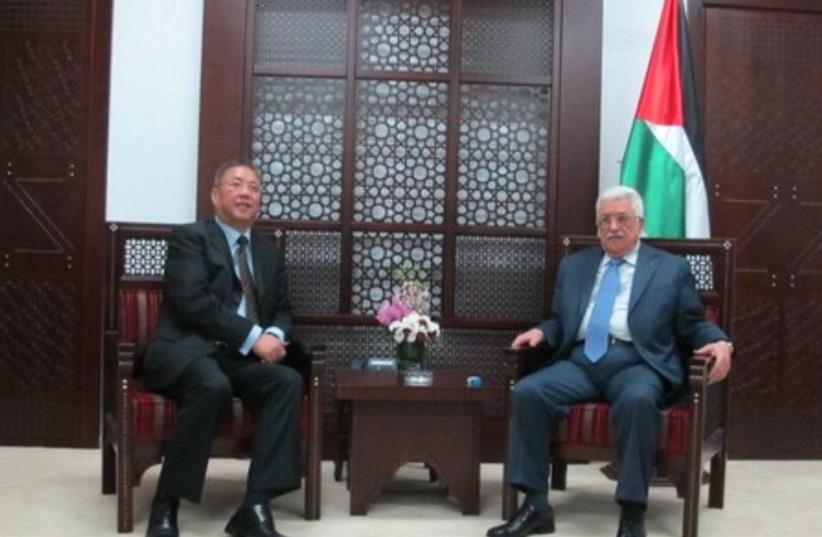 Palestinian Authority President Mahmoud Abbas with China's Special Envoy on the Middle East Issue Gong Xiaosheng [File 2016]
(photo credit: CHINESE FOREIGN MINISTRY)
Advertisement
China is willing to play an active role in pushing forward the frozen peace process between Israel and the Palestinians, official Palestinian news agency Wafa reported Tuesday. The report cited remarks made by Chinese special envoy to the Middle East, Gong Xiaosheng, during a meeting on Monday night with Palestinian Authority President Mahmoud Abbas in Ramallah.During the convening, Abbas reportedly briefed Gong on recent developments, notedly regarding the PA leader's visit to Washington in April, his trip to Russia in early May and his meeting with US President Donald Trump last week in Bethlehem. While the Trump administration is weighing a drive to resume Israeli-Palestinian talks through a regional process, China is looking to increase its role in the Middle East, particularly with respect to the Israeli-Palestinian conflict and the Syrian crisis. It is one of the six world powers and one of five members of the UN Security Council with veto power.In the meeting with Abbas on Monday, Gong additionally underlined China's support of the Palestinians and their geopolitical aspirations.Along with bilateral diplomatic relations, the Chinese envoy expressed his country's readiness to bolster economic ties with the Palestinians. Abbas hailed the comments and the Palestinian Authority's "special" relations with the East Asian nation. China is one of Israel’s top trading partners, but the two governments are often at odds on regional issues.Beijing has strong ties with Tehran and recognizes Palestine as a state.In mid-March, Prime Minister Benjamin Netanyahu visited China for three days to mark 25 years of diplomatic relations between the two countries.Ahead of the visit, Chinese Foreign Minister Wang Yi said, “The issue of Palestine is an open wound in the Middle East. Peace may be delayed, but justice cannot be denied. China firmly supports the two-state solution and will continue to do what we can to help restart the peace talks.”