Hamas confirms death of two of it's operatives in tunnel collapse 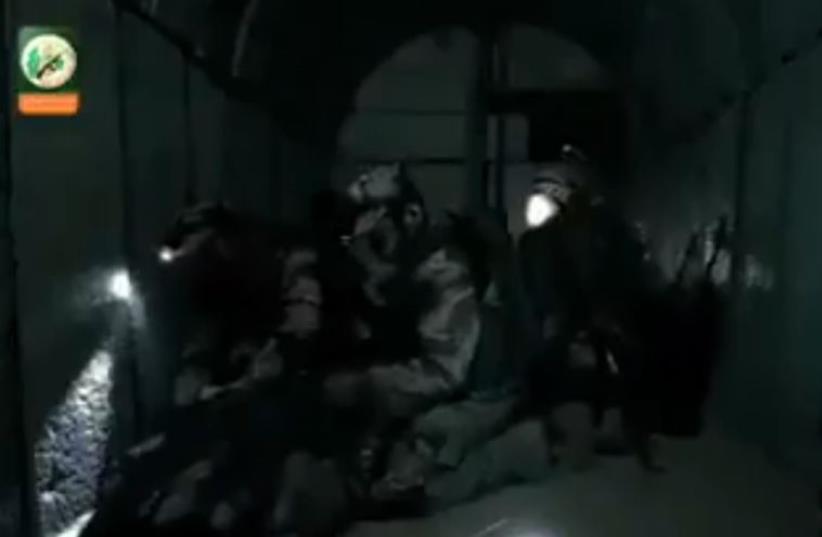 Hamas video depicting the underground realm of the terror group's tunnel operations
(photo credit: screenshot)
Advertisement
Hamas officials confirmed on Wednesday morning the death of at least two of it's operatives in a terror tunnel collapse. Eight others were reported missing after the underground passageway caved in, according to Hamas military wing, the Izzadin al-Kassam Brigades. The incident the second time in recent weeks that an underground passageway collapsed with Hamas figures inside.
Hamas shows off underground Gaza tunnels in video
Along with the announcement on Wednesday morning, the Palestinian terror group released a promotional video depicting the underground realm of Hamas' tunnel operations along with other apparent militant training. Last week, seven Hamas men were killed when a tunnel collapsed close to the Gaza Strip’s eastern border with Israel, the Islamist group’s armed wing said on Thursday.It said the collapse occurred last week as a result of heavy rain and it took two days to find the bodies and announce the deaths. Mosques across the Palestinian enclave mourned those killed, calling them “Martyrs of the Preparation,” a reference to their work digging tunnels used to attack Israel.Ismail Haniyeh, a Hamas leader in Gaza, said on Friday that the group will never stop digging tunnels and upgrading rockets in preparation for any possible confrontation with Israel.Haniyeh, who is also Hamas’s deputy chief, spoke to a crowd of worshipers in a Gaza City mosque during prayers that were followed by the funeral for the seven Hamas men.“There are heroes east of Gaza City, digging the rocks and building tunnels," said Haniyeh. "And west of Gaza, heroes are testing rockets every morning and every day and it is all preparations.""Under the ground and above the ground, in tunnels and above the ground and into the sky, with rockets and in the sea and everywhere, it is the permanent preparation for the sake of Jerusalem and Palestine, and for the sake of the intifada of Jerusalem and the sake of our people,” Haniyeh said.In response, Prime Minister Benjamin Netanyahu said earlier this week that Israel will respond more forcefully than it did during 2014’s Operation protective Edge it it is attacked from the Gaza Strip’s terror tunnels.Netanyahu, speaking to the annual meeting of Israel’s ambassadors and consuls-general, related to the recent Hamas threats and boasts about those tunnels.“If we are attacked from the tunnels in the Gaza Strip we will respond with great force against Hamas, with much greater force then we used during Operation Protective Edge,” he said.“I think they understand this in the region, and in the world,” he added. “I hope we do not need to do this, but our defensive and offensive capabilities are developing rapidly, and I do not suggest that anyone test us.”