The incident is the latest in a number of similar tunnel collapses this year. 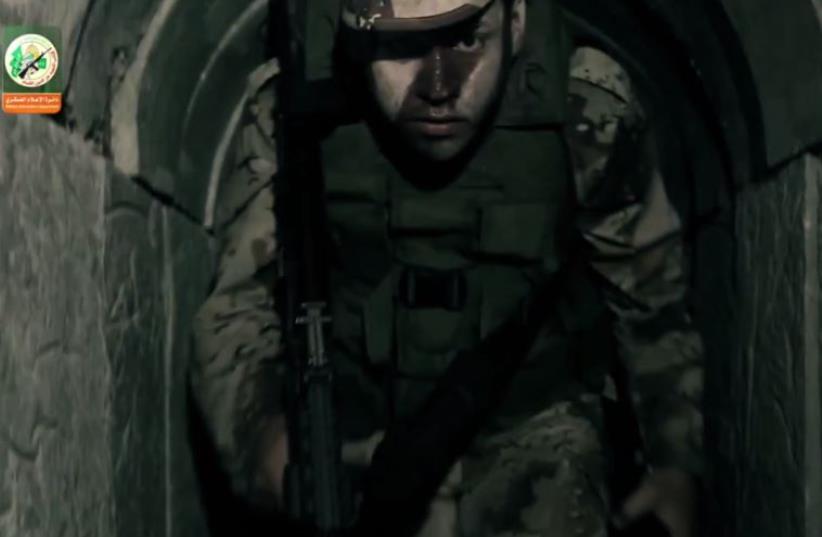 A Hamas operative in an underground tunnel in Gaza‏
(photo credit: screenshot)
Advertisement
A Hamas militant was killed in the Gaza Strip after a terror tunnel collapsed, Palestinian news agency Ma'an reported.The military wing of Hamas, Izzadin Kassam Brigades, released a statement saying that a member of the brigade, Ana Salameh Abu Lashin was killed when the tunnel collapsed on him.According to the Palestinian news agency, Israeli officials have claimed that Hamas is preparing for another round of combat with Israel and have threatened retaliation. In October, three ISIS-sympathizing Israeli men were accused of attempting to build a tunnel from the Arab town of Taiba into the West Bank.The investigation into the incident revealed that the group had intended to use the tunnel to smuggle weapons into Israel, and “prepare for ‘Judgment Day.’”Eight Palestinian operatives were wounded in August when a tunnel collapsed in Shuja'yya in the Gaza Strip. The incident added to the four that occurred earlier the same month.Prime Minister Benjamin Netanyahu revealed that Israel had developed new technology to locate the tunnels after a tunnel was uncovered by the IDF leading into Israeli territory in April.

Adam Rasgon and Zach Pyzer contributed to this article.
Advertisement
Subscribe for our daily newsletter