The incident occurred in the Arab village of Kfar Aqab, located near Kalandia refugee camp, where witnesses say IDF troops entered while conducting an investigation. 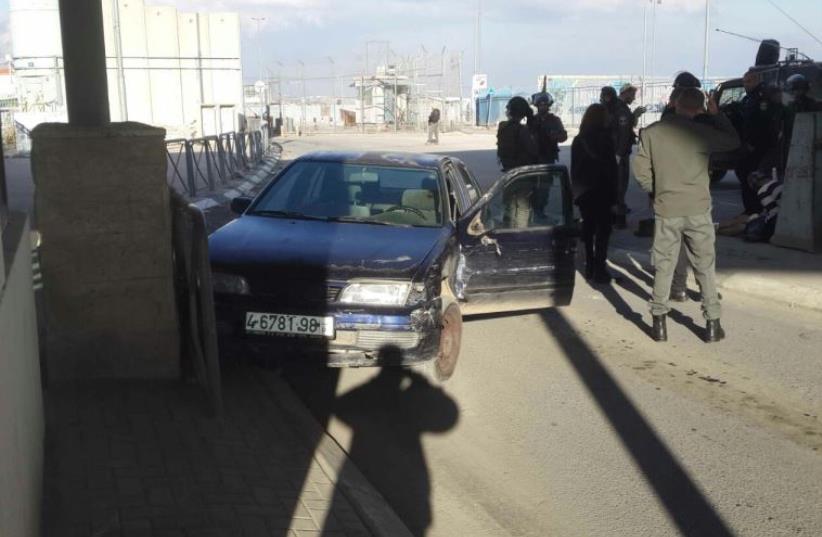 Scene of the Kalandia attack
(photo credit: Courtesy)
Advertisement
Two Palestinian youths were injured Wednesday morning after violently confronting IDF military forces on the outskirts of Jerusalem, according to Palestinian news agency Ma'an.
The incident occurred in the Arab village of Kfar Aqab, located near Kalandia refugee camp, where witnesses say IDF troops entered while conducting an investigation.
According to Ma'an, Palestinian youths confronted the soldiers upon their entrance.
Red Crescent Medical Emergency services said that a Palestinian youth was seriously injured after he was shot in the chest and was taken to a nearby hospital for treatment, Ma'an added.
Another youth allegedly shot in the leg was in moderate condition and was taken to a Ramallah medical facility. In response, an IDF spokesperson said that the circumstances of the incident were currently under investigation and gave a brief description of the events that unfolded."Israeli military forces entered the town of  Kfar Aqab, near Kalandia, where they were confronted by residents of the village. The residents proceeded to throw bottles and blocked roads to traffic. After giving multiple warnings, IDF forces opened fire into the air in order to disperse the crowd."The IDF said that at least one person was taken to Shaare Zedek Medical Center in Jerusalem following the incident. The Kalandia checkpoint, which lies between Ramallah and Jerusalem, has been the scene of frequent violence and played host to a recent incident.Last month, a sister and brother who tried to stab a policeman at the checkpoint were shot and killed by a privately contracted security guard and not police, as was originally believed. Investigators concluded that the police officers on the scene followed protocol, firing warning shots in the air, Channel 10 reported. It was the shots fired by the security guards stationed at the checkpoint that killed the assailants, who were later identified by the Palestinian Authority as Maram Abu Ismail, 23, and her 16-year-old brother, Ibrahim Taha.
According to police, the pair aroused suspicion when they walked toward soldiers on a road that is designated for vehicles instead of the path designated for pedestrians.
Abu Ismail had her hand hidden in her handbag and Taha had a hand hidden behind his back. Despite warnings from the police, the pair continued to walk toward the security officials, according to police.
The woman pulled a knife out from her bag and threw it at a police officer standing in front of her. Shots were fired and the two would-be stabbers were subdued.
Two additional knives were found on the male terrorist, said police.

Tovah Lazaroff contributed to this article.
Advertisement
Subscribe for our daily newsletter