Report: Islamic education in US hostile to Israel, distorts conflict

The report, which surveys Islamic Studies in the US and Canada, also showed that, although the textbooks reflect a generally tolerant tone and even respect for Jews, Israel is often delegitimatized. 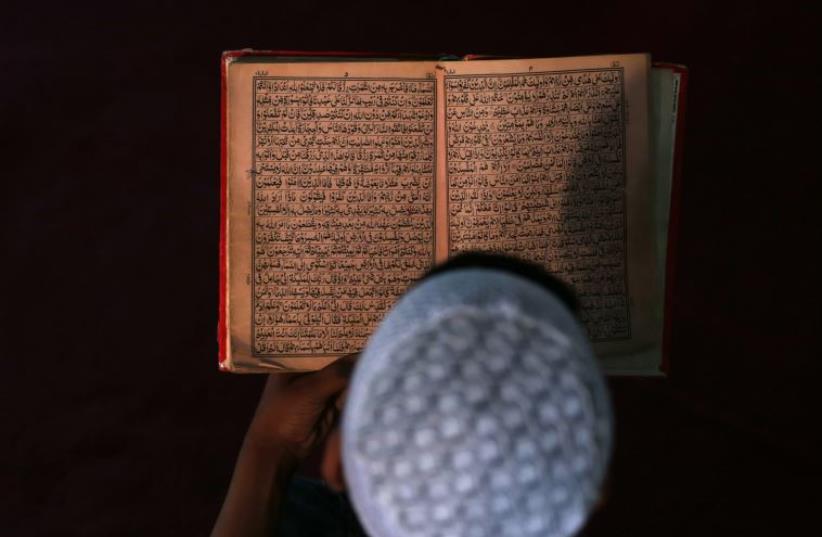 An Afghan boy reads the Koran in a madrasa, or religious school, during the Muslim holy month of Ramadan in Kabul June 30, 2014
(photo credit: REUTERS/MOHAMMAD ISMAIL)
Advertisement
NEW YORK – Islamic education curricula in the United States contain a clear “us versus them” paradigm that projects hostility toward Israel and distorts the Israeli-Palestinian conflict, according to a study conducted by the Institute for Monitoring Peace and Cultural Tolerance in School Education.The report, which surveys five Islamic Studies curricula studied in the US and Canada, also showed that, although the textbooks reflect a generally tolerant tone and even respect for Jews, Israel is often delegitimized.“When discussed at all, Israel is presented by the curricula as a usurper and referred to on occasion as Palestine. There is no discussion of peaceful solutions to the Israeli-Palestinian conflict,” the report states.In two of the curricula, Israel appears on some maps, while others omit the name entirely. One textbook even states that Israel has no historic claim to the land, while another places anti-Israel activities at the center of its call for political activism.“It seems that Israel is the place where tolerance and acceptance stop as far as Islamic education in the US is concerned,” Marcus Sheff, CEO of the Institute, told The Jerusalem Post on Thursday.Sheff explained that the narrative about Israel and the Palestinians is simplistic, one-sided and unhelpful.“History is distorted and Israel is demonized. There is no mention of peace efforts, no discussion of peaceful solutions,” he said.“Imagine the possibilities of educating young Muslims in America as to the real issue, to the fact that the conflict is complicated, and then presented with these difficulties, we would open the dialogue,” he told the Post. “Can you imagine if there was a dialogue between young Muslims and young Jews in the United States? The door hasn’t been opened because Muslims weren’t educated to do this.”If such dialogue existed at a young age, Sheff said, it would solve many problems later on in universities, such as conflict between pro-Palestinian and pro-Israel students.The research, coordinated by Dr. Eldad Pardo of the Hebrew University of Jerusalem, focused on Islamic textbooks from the International Educational Foundation of Skokie, Illinois (IQRA); the Islamic Services Foundation of Dallas, Texas (ISF); the Bureau of Islamic and Arabic Education of the Islamic Center of Southern California (ICSC); Yahiya Emerick’s Student Textbook; and the International Islamic Publishing House in Riyadh, Saudi Arabia, written by Abu Ameenah Bilal Philips.While the five Islamic curricula are all based on Shari’a law and encourage brotherhood and commitment to the worldwide Muslim nation, aside from their views on Israel, most of programs carry a generally tolerant perspective and even encourage involvement in American civic and economic life.The report states that four of the five curricula comply with the UNESCO standards of peace and tolerance, which state that “education should promote understanding, tolerance and friendship among all nations, racial or religious groups.”The fifth, written by Bilal Philips does not. According to the report, this curriculum teaches that Islam should be imposed by the full force of the Muslim state.“With the exception of Bilal Philips’s Islamic Studies, the books are generally respectful of the “other,” their culture and ways of life and particularly of monotheistic religions,” the study states.“They do not glorify war or promote violence as a means of resolving conflicts. But they do teach about military jihad. Historical theological disputes, mainly with Christianity, and early conflicts, mainly with Jewish tribes, are included.”In the Bilal Philips curricula, which is published in Saudi Arabia for use in the US, Islam and the West are presented as binary opposites.“The West is associated with a variety of social ills and immorality. Islam and Muslims are portrayed as being under constant threat and thus forced to fight, through jihad,” the study shows.“I think we need to start having a conversation with Muslim educators in America about this,” Sheff told the Post. “We’re not satisfied with just creating reports, we now want to make a difference and to change what we can change.“I think what these syllabuses are doing is they are blocking the conversation, and that’s a shame” he continued. “Education is where it starts.”