Despite Liberman's comments, Netanyahu has continued to ensure that the bodies would soon be returned. 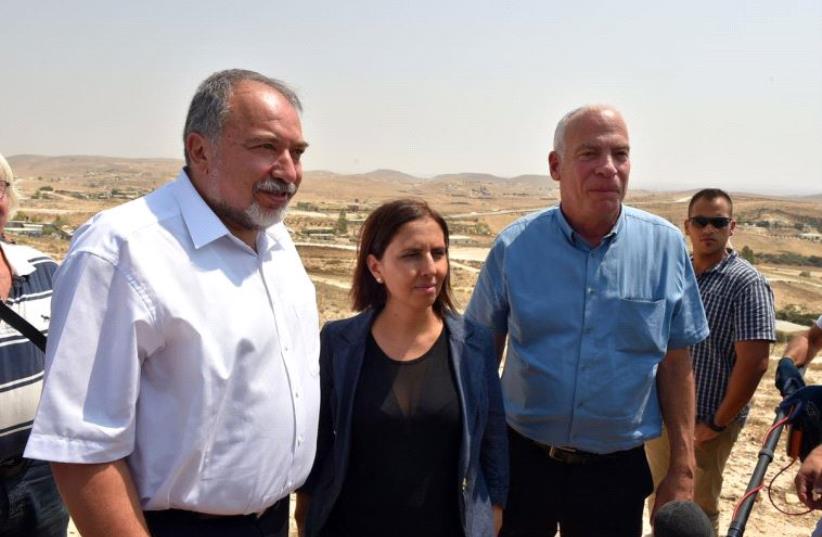 Defense Minister Liberman along with Agriculture Minister Uri Ariel and Social Equality Minister Gila Gamliel toured Beduin communities.
(photo credit: ARIEL HERMONI / DEFENSE MINISTRY)
Advertisement
Defense Minister Avigdor Liberman spoke of his opposition to a deal with Hamas to return the bodies of fallen soldiers, Oron Shaul and Hadar Goldin. The comments were reportedly made behind closed doors during a tour in the south Monday morning, Channel 10 news reported. The comments contradicted Prime Minister Benjamin Netanyahu, who has repeatedly said that he would do all he could to return the bodies of fallen soldiers, Oron Shaul and Hadar Goldin. "The soldiers' bodies will not be returned, I don't see that happening. In the past I was against the Schalit deal and I don't plan on doing a deal with Hamas in the future," Liberman reportedly stated.Despite Liberman's comments, Netanyahu has continued to ensure that the bodies would soon be returned. When speaking on the subject two months ago, Netanyhu stated, "This mission is at the top of my mind, I will not let go, we will finish this, even if it takes time." The Goldin family reacted to the statements, saying, "A defense minister that gives up willingly on the return of soldiers from the battlefield does not have the moral authority to continue serving as defense minister.""We call upon the prime minister, the defense minister and the Israeli public to stand for the return of Hadar and Oron."Zionist Union MK Amir Peretz responded, stating, "Liberman's statement that he does not plan on returning the bodies of Hadar Goldin and Oron Shaul is shameful and threatens to erase the IDF's ethical code. Oron Shaul and Hadar Goldin are brave soldiers that fell defending the State of Israel."Peretz continued, "Those who do not work to return our soldiers from the battlefield morally can not send them to the battlefield. I urge Liberman to retract his words."Liberman's office released a statement saying, "In contrast to the Channel 10 news report, Defense Minister Avigdor Liberman did not address today, or recently, the subject of returning the bodies of Oron Shaul or Hadar Goldin. Liberman is and has always been against prisoner exchanges of this kind. It is to be recalled that he also voted against the Schalit deal and he believes that it is unacceptable for anyone to believe that terror pays."