Jordanian King Abudllah II and Egyptian President Abdel Fattah al-Sisi were also reportedly at the summit in Aqaba and met separately with Kerry. 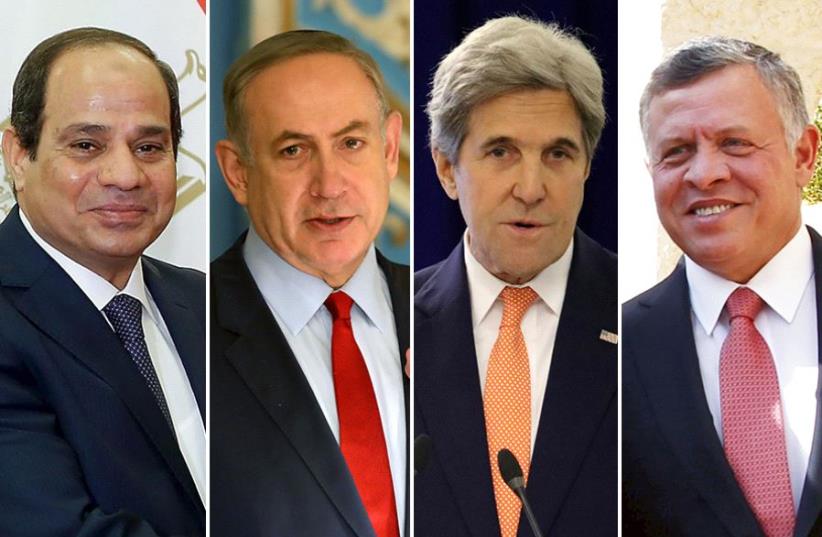 Sisi, Netanyahu, Kerry and Abdullah
(photo credit: REUTERS)
Advertisement
Former US secretary of state John Kerry presented a proposal on a regional approach to the Israeli-Palestinian peace process to Prime Minister Benjamin Netanyahu during a secret convening in the southern Jordanian town of Aqaba in early 2016, Haaretz reported on Sunday. Kerry garnered Jordanian and Egyptian backing for the plan, which included two sticking points for Israel - Palestinian recognition of Israel as a Jewish state and the resumption of direct talks between the sides - among the principles outlining a path to a comprehensive peace deal, according to the report citing former senior Obama administration officials.Netanyahu rejected Kerry's plan, allegedly citing the difficulties he would face to gain approval by the Israeli government's right-wing coalition.  Jordanian King Abudllah II and Egyptian President Abdel Fattah al-Sisi were also at the summit in Aqaba and met separately with Kerry. Palestinian Authority President Mahmoud Abbas was not present at the meeting in Aqaba, but he was reportedly informed of it by Kerry. Abdullah and Sisi were reportedly urged to gain support for the plan from other regional Arab states such as Saudi Arabia and the United Arab Emirates. According to a former senior US official, Kerry also petitioned the Jordanian king to press Abbas to agree to relaunch talks with Israel on the basis of the US blueprint. The four-way meeting in Aqaba also allegedly set the stage for the short-lived rumored talks of a unity government between Netanyahu and opposition leader Isaac Herzog (Zionist Union).
John Kerry lays out Mideast peace vision
The reported February 21 meeting in Aqaba came nearly two years after the collapse of the latest round of US-moderated negotiations between Israel and the Palestinians. The plan presented by the top American diplomat at the time, was said to have included six principles - allegedly the same as those he presented in a fiery December speech on the Middle East conflict weeks before leaving office. Kerry, who in 2013 and 2014 attempted to restart direct talks between the two sides, offered several US principles that he said would enshrine such a solution, including a re-emphasis of international support for two states for two peoples — one Jewish and one Arab; the outlining of secure and recognizable borders for a "contiguous" Palestinian state; a "fair and just" settlement for Palestinian refugees consistent with the recognition Israel as a Jewish state; and an end to all claims, including a final resolution on the status of Jerusalem.The Haaretz report emerged days after Netanyahu met in Washington with US President Donald Trump for the first time since the latter's inauguration. During the visit, Trump said he was open to ideas beyond a two-state solution, the long-standing bedrock of Washington and the international community's policy for a settlement between Israel and the Palestinians.In a sharp pivot from the Obama-Kerry approach to the conflict, Trump said that the United States would work toward peace but said he was leaving it up to the parties themselves ultimately to decide on the terms of any agreement.Michael Wilner and Reuters contributed to this report.