“The PA teaches its children to reject Israel’s right to exist, encourages them to view Jews as evil and directs them to embrace terrorist murderers as role models.” 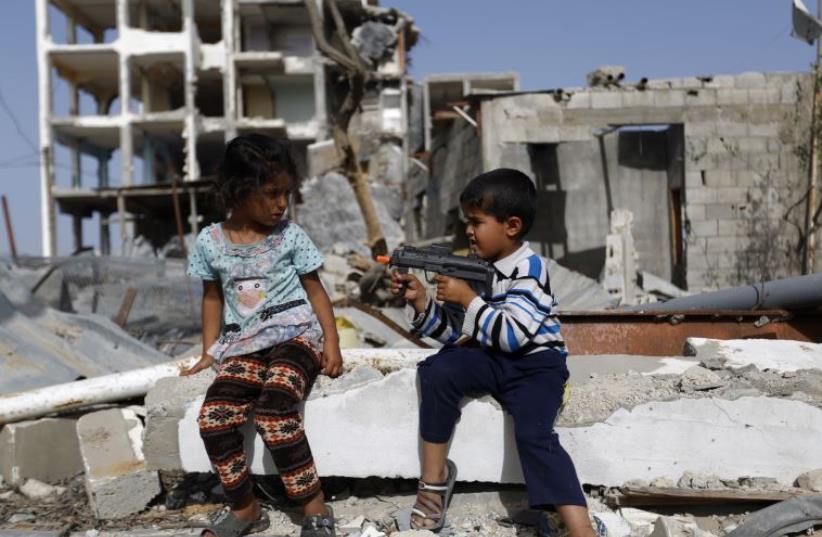 Palestinian children play with a toy gun in front of homes ruined during Israel's bombardment in 2014
(photo credit: MOHAMMED ABED / AFP)
Advertisement
An Israeli teachers’ association will present a comprehensive report about anti-Semitic and anti-Zionist education in Palestinian Authority schools, at a global education conference that opened on Tuesday.The Association of Secondary School Teachers in Israel, in partnership with the group Palestinian Media Watch – which monitors and analyzes the PA through its media and schoolbooks – is set to present the 57-page report at the Education International World Congress.In the foreword of the document, the association writes that “the PA teaches its children to reject Israel’s right to exist, encourages them to view Jews as evil and directs them to embrace terrorist murderers as role models.”It also accuses the PA of depriving their own children of a peaceful future.The report, which Palestinian Media Watch compiled, includes a detailed list of examples of Palestinian children’s exposure to what the monitor group’s director, Itamar Marcus, has called “terror glorification.”
Palestinian Media Watch
Marcus was invited to be one of the Association of Secondary School Teachers in Israel’s delegates at the congress, and will be the one to present the report.Copies will be handed out at the start of the conference to delegations representing 400 teachers’ unions from 171 countries.Speaking to The Jerusalem Post this week ahead of the conference, Marcus said he thinks the evidence will shock those in attendance.“When you hear the problematic issues one by one, you don’t get the same sense as when you really see the totality of it – the world of the Palestinian child,” he said.According to Marcus, the world of the Palestinian child means “you can wake up and walk to school on a street named after a terrorist and then go to school on a street named after a terrorist and in the afternoon play in a sporting event named after a terrorist. It’s being enveloped in terror glorification, denial of Israel’s right to exist, denial of Jews’ right to exist as human beings – this is everywhere now.”The report states that “the PA and the politically dominant Fatah movement that is also headed by [PA President Mahmoud] Abbas, teach Palestinian children through their official communication structures that Jews and Israelis possess inherently evil character traits. Fighting [Jews and Israelis] is said to be heroic and even Allah’s will. Terrorists who have murdered dozens of Israeli civilians are said to be national heroes and Islamic Martyrs.”The document points to official PA educational programs for children on television, during which children have recited poems that say, among other things, that Jews are “monkeys and pigs,” Jews are “enemies of Allah,” and Zion is “Satan with a tail.”In addition, the report says, the PA has named dozens of schools after terrorists, including one school named for Haj Amin al-Husseini – the grand mufti of Jerusalem during the British Mandate, who was a Nazi collaborator and a war criminal responsible for the deaths of thousands of civilians.Children attending such schools have been interviewed on official PA television and explained that studying in schools named after terrorists has turned the institutions’ namesakes into role models.Some of the schools also prominently display pictures of the terrorists, with captions such as “The Heroic Martyr.”The report details each of the schools, and the terrorist attacks for which their namesakes were responsible.In addition, it states that the PA ’s Council for Sport and Youth Affairs denounced a successful peace-building event as “a crime against humanity,” and that the PA prohibits peace-building contacts between Israeli and Palestinian youth.“The Palestinian Authority glorifies terror by naming cultural events, sporting events, streets, and other things after terrorists, and organizes school activities and Facebook posts that promote hatred and violence,” declares the report.Indeed, it asserts, the General Union of Palestinian Teachers – one of the many unions scheduled to be at the educational conference – is no stranger to terrorism glorification.At a GUPT event in 2013, the union’s secretary-general “singled out three murderous terrorists and compared Palestinian teachers to them, stating that they are ‘exalted examples of sacrifice and bravery,’” the report says.The report also points to Palestinian textbooks as expressing a message of hate for Zionism, and says many of them present a world in which Israel does not exist at all.“The schoolbooks of the Palestinian Authority Ministry of Education include sections that actively encourage hatred of Israel, anticipate a future without Israel, and package the conflict as mandatory and religious. Instead of working to eliminate the current hate, the PA has chosen to still include these destructive messages in its curriculum,” it says.The report’s authors conclude with the hope “that this report will serve as an eye-opener and spawn debate within the Palestinian Authority, and prompt PA leaders to adopt peace education for Palestinian children.”Earlier this month, another teachers’ group, the Israeli Teachers’ Union, revealed that it had been working alongside delegates from GUPT, the South African Democratic Teachers’ Union (SADTU ), the UK’s National Union of Teachers (NUT), and other members of the Education International Advisory Committee to the Middle East to prepare a joint resolution regarding Israel and the Palestinian territories.The resolution – which called settlements in the West Bank illegal, and called to remove the security barrier and lift the blockade on Gaza – caused an uproar among teachers and the Israeli public when it was revealed two weeks ago.At the time, the teachers’ union said it had agreed to the wording to prevent the much harsher resolutions that SADTU and NUT had put forward from being discussed at the Education International conference – resolutions that included calls to join the boycott, divestment and sanctions movement, and accusations that Israel had committed “heinous crimes against Palestinians.”The teachers’ union has since retracted its support for the joint resolution, although the SADTU and NUT resolutions are still on the voting agenda for the congress.Education International describes itself as “the world’s largest federation of unions representing 30 million education employees in about 400 organizations in 170 countries and territories.” It hosts a world congress every four years.