Prior to the signing of the Oslo Accords, the PLO had refused to recognize Israel since the Zionist state was founded in 1948. 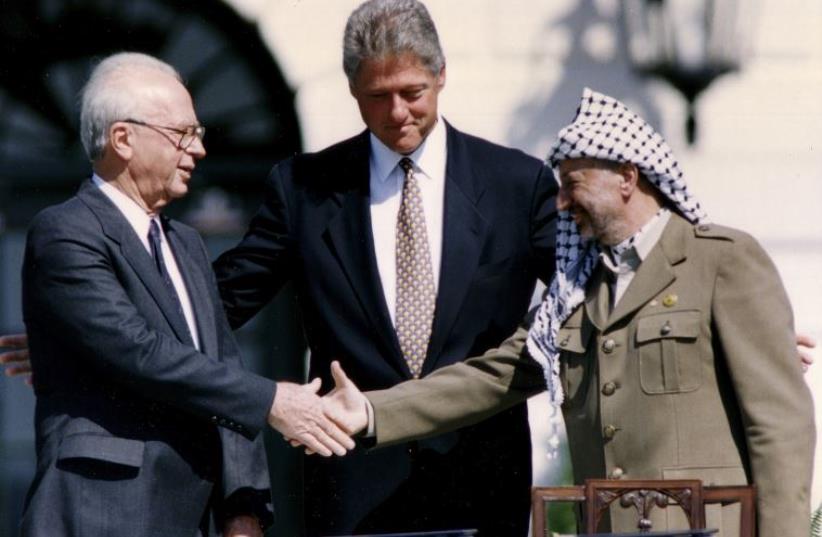 Then-PLO Chairman Yasser Arafat (R) shakes hands with then-prime minister Yitzhak Rabin (L), as U.S. President Bill Clinton stands between them
(photo credit: REUTERS)
Advertisement
The Palestine Liberation Organization is threatening to withdraw recognition of Israel, its most senior peace negotiator told an Arab newspaper on Thursday.Saeb Erekat, who recently took over as secretary-general of the PLO, is quoted by Al-Quds al-Arabi as saying that a decision on reversing recognition of Israel - which was enshrined in a 1993 exchange of letters between the respective Israeli and Palestinian leaders at the time, Yitzhak Rabin and Yasser Arafat - will be made after PA President Mahmoud Abbas completes a round of consultations with Arab leaders this month.Prior to the signing of the Oslo Accords, the PLO had refused to recognize Israel since the Zionist state was founded in 1948.Abbas is due to meet with Egyptian President Abdel Fattah al-Sisi on Sunday before continuing to Saudi Arabia, where a conference of Arab League foreign ministers is scheduled to convene next week.Erekat's remarks contradict a recent statement made by Abbas during a meeting with a group of Dutch Jews in Holland last week.“We never said we were going to cancel the Oslo Accords,” Abbas said Friday during a meeting near The Hague with members of the Center for Information and Documentation on Israel, or CIDI, Dutch Jewry’s main pro-Israel advocacy organ and watchdog on anti-Semitism.“We are not going to cancel, we will not cancel anything,” he added, as long as “Israel respects its obligations.”On Sept. 30, at UN headquarters in New York, Abbas said: “We cannot continue to be bound by these signed agreements with Israel” because “the status quo cannot continue.”Abbas dropped his promised bombshell at the UN General Assembly this past September when he threatened to stop abiding by the Oslo Accords, which have governed the relations between Israel and the Palestinians for more than two decades.“Israel has destroyed the foundations upon which the political and security agreements are based,” Abbas said.“We therefore declare that we cannot continue to be bound by these agreements and that Israel must assume all its responsibilities as an occupying power, because the status quo cannot continue....As long as Israel refuses to cease settlement activities and release of the fourth group of Palestinian prisoners in accordance with our agreements, it leaves us no choice but to insist that we will not remain the only ones committed to the implementation of these agreements.”Although he directly referred to the Oslo Accords, he stopped short of stating that they had been annulled, and instead relied on watered-down language that tempered the impact.JTA contributed to this report.