“Russian-Israeli relations have a special character, largely because Israel is home to over a million of our compatriots." 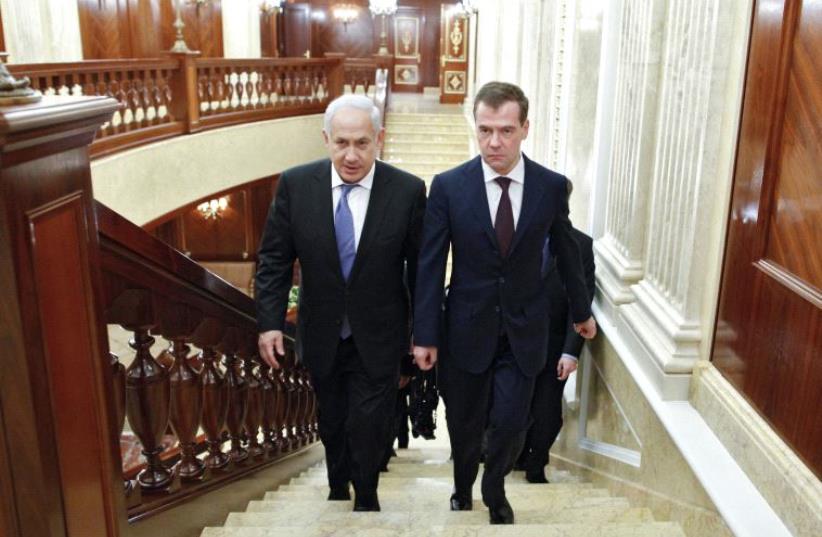 DATE IMPORTED: March 24, 2011 Russia's President Dmitry Medvedev (R) and Israel's Prime Minister Benjamin Netanyahu walk during their meeting at the Gorki presidential residence outside Moscow March 24, 2011.
(photo credit: RIA NOVOSTI / REUTERS)
Advertisement
Palestinian Authority television reported Saturday that Dimitry Medvedev, the Russian Prime Minister, will arrive on November 9 in order to assist with peace efforts between the Palestinian leaders and Israel, according to Channel 10.The report also stated that Medvedev will meet with both Palestinian Authority President Mahmoud Abbas and Prime Minister Benjamin Netanyahu.On October 18, Russian President Vladimir Putin and Netanyahu exchanged greetings on the 25th anniversary of restored diplomatic relations between the two nations. Both leaders emphasized a joint interest in developing bilateral cooperation, including discussions on urgent international and regional issues. The two leaders have met four times in the past 16 months.Medvedev's trip, according to the Russian embassy's website said that the visit is intended to strengthen cooperation in various fields.“Over the years, our two countries and peoples managed to escape from the unfortunate period of mutual alienation and become genuine partners who understand and who know how to respect each other’s interests,” the statement on the website read. “Russian-Israeli relations have a special character, largely because Israel is home to over a million of our compatriots. The Russian-speaking community is a powerful catalyst for the development of bilateral political, economic, cultural, business and cultural ties.”

Herb Keinon contributed to this article.