MEMRI Report author to Post: We believe that Western funding organizations must examine the agendas of their target bodies, and make sure that their support is used for the purposes intended. 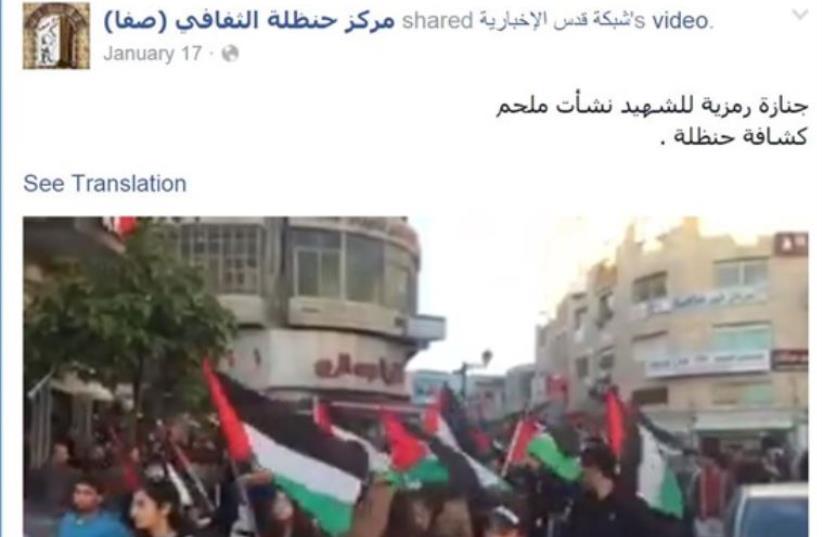 The Scouts troop of the Handala Cultural Center marches at mock funeral for Nashat Melhem.
(photo credit: MEMRI)
Advertisement
Palestinian civil society organizations that receive foreign funding are inciting terrorism, according to a new report by MEMRI (the Middle East Media Research Institute) and shared exclusively with The Jerusalem Post on Monday.Palestinian organizations in the West Bank that receive funding from Western countries, institutions, and foundations, are “openly expressing support for terrorism,” said the report.“They express this support with ceremonies exalting terrorists, with public displays of support for attacks and their perpetrators, by lionizing terrorists, and by posting inciting content on social media,” it said.For example, The Palestinian Bar Association, the official body for lawyers in the West Bank and Gaza Strip, awarded an honorary attorney certificate to Muhannad Al-Halabi, a law student, who was killed after murdering two in Jerusalem and injuring two others, including a two-year old baby in October.The Palestinian Bar Association receives funding from the EU, EU Police Coordinating Office for Palestinian Police Support (EUPOL COPPS), the United Nations Development Program (UNDP), and UN Women, noted the report.On October 10, the Palestinian Bar Association announced: "In its meeting today, the Palestinian Bar Association decided to award an honorary attorney's certificate to the martyred hero Muhannad Al-Halabi, and also decided that the next swearing-in ceremony [for new attorneys] will be named for him."The announcement also said members of the Association also made condolence calls to the Al-Halabi family.In addition, On November 1, the Bar Association declared that all legal institutions in Ramallah and Al-Bireh area would be closed so that its members could participate in the funerals of "the hero martyrs" 'Omar Al-Faqih – killed after he attempted to carry out a stabbing attack at the Qalandia checkpoint on October 17, 2015 – and Muhammad Shamasneh – killed after he carried out a stabbing attack on a bus on October 12, 2015.“The report presents several examples that show how bodies supported by Western organizations engage in incitement and support of terrorism,” Batsheva Shanee, the author of the report and a research fellow at MEMRI, told the Post.“Let me point out that the Western countries and organizations mentioned in the report very likely have every intention that their financial support be used constructively within Palestinian society. Therefore it is important to show how some of this aid reaches terror supporting bodies instead,” she added.“We believe that funding organizations must examine the agendas of their target bodies, and make sure that their support is used for the purposes intended. We hope that MEMRI’s report will help raise awareness of this issue.”Another example highlighted in the report is The Popular Art Centre in Ramallah which receives funding from the EU via the AM Qattan Foundation and the Taawon association, which receives some of its funding from the Bill and Melinda Gates Foundation, the UN Office for the Coordination of Humanitarian Affairs (OCHA), the EU, UNESCO, the Swedish International Development Cooperation Agency (SIDA), the Canadian embassy in Lebanon, and more.The Centre held a fundraiser in February in solidarity with families of Jerusalem “martyrs” whose homes had been demolished.“One of the speakers at the fundraiser was Muhammad 'Alian, father of Bahaa 'Alian who, along with Bilal Abu Ghamen, perpetrated the October 13, 2015 shooting and stabbing attack on a bus in the Armon HaNatziv neighborhood of Jerusalem, in which three people were killed and seven were wounded,” said the MEMRI report.Muahmmad ‘Alian congratulated the martyrs of each Palestinian city: "The martyrs of Hebron, capital of the 'Honor and Strength Intifada'; the martyrs of Jerusalem, the intifada's initiator and bride; the martyrs of Ramallah, the most beautiful of cities and the leader of the intifadas, and the martyrs of Nablus, Tulkarm, Jenin and the [refugee] camps of steadfastness and defiance...""We, the families of the martyrs, demand of [both] the official and the popular echelons to inculcate the culture of the martyrs and to organize culture activities dealing with the martyrs' legacy, their stories, and their lives, [activities dealing with] each and every martyr – for each of them has a story worthy of study, examination and attention," said the terrorists father.Abother group featured was the Shabab Al-Balad, a youth forum for culture and education operating in the Jabel Mukaber neighborhood of east Jerusalem by Taawon, the Burj Al-Luqluq association, which functions in the Old City of Jerusalem and is funded by foreign sources such as the UNDP, the United Nations Population Fund (UNFPA), UNESCO, the EU, the French embassy in Jerusalem, the French Agency for Development (AFD), the Swedish International Development Cooperation Agency (SIDA), the British Consulate in Jerusalem, the World Bank, and the Pontifical Mission.Shabab Al-Balad’s Facebook page had a statement on October 4, 2015 titled "Allah, accept them as martyrs" and included pictures of Muhannad Al-Halabi and Fadi ‘Aloun, who carried out a stabbing attack in Jerusalem on October 4.