"It was inconceivable that an attack could happen in my quiet little suburb." 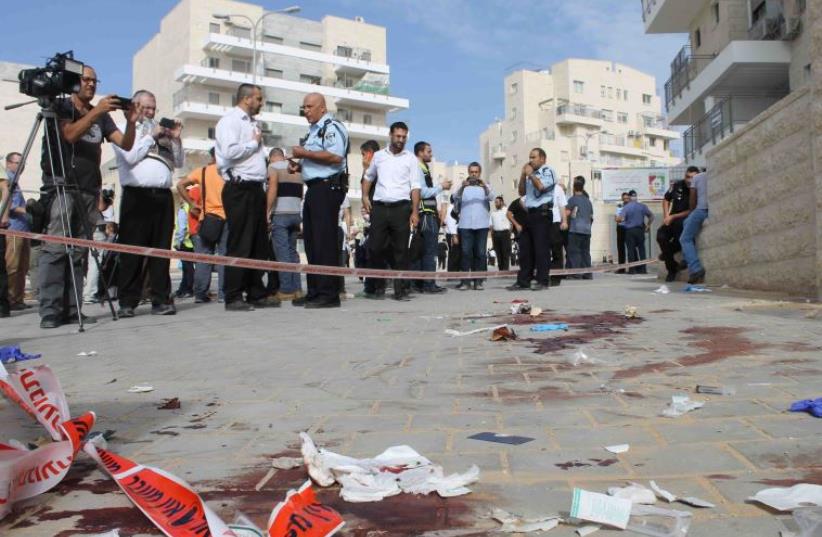 Scene of stabbing attack in Beit Shemesh
(photo credit: SAM SOKOL)
Advertisement
The first sirens sounded while I was standing next to the sliding glass doors of my apartment’s balcony, overlooking the valley separating my neighborhood of Ramat Beit Shemesh Alef from the newly established Ramat Beit Shemesh Gimmel.I didn't pay much attention at first, thinking them most likely the result of a work related accident or a birth. It was inconceivable that an attack could happen in my quiet little suburb.The presence of large numbers of Arab workers, many of them from the territories, did not cross my mind, despite it being the occasional topic of security related conversation among residents. Any danger, at least to me, was quite hypothetical.
Stabbing attack in Beit Shemesh
Several minutes later, however, while walking my son to school, I saw several cars with flashing sirens flash pass me in the direction of my house. Pulling out my phone, I checked Facebook, finding a post claiming that there had been an unspecified attack in Gimmel.Urging my son to move at a fast clip so that I could get him behind the gated and guarded walls of his elementary school, I called my wife, only to be told that rumor had it that Arabs had attempted to board a school bus.Soon after, and upon finding that no cabs were available, I began running toward the scene of the attack.Ramat Beit Shemesh Alef and Gimmel are in close proximity but the route between them is circuitous and dusty. I was soon winded on the side of the road when a car pulled up.“Gimmel,” I called out.I quickly jumped in the car, and before I even managed to get the door closed we were driving at full speed.Cramped amongst heaping bags of groceries in the back seat, I listened to the couple who had picked me up worry over their children in Gimmel who were home with a sitter.“The way into the neighborhood is blocked by the police,” the woman lamented, as her husband wheeled the car around to find an alternate route.Passing through Alef, we sped toward a second road in the process of being paved, only to be stopped short by a mass of construction supplies.All around us were Arabs busy at their labors as if no attack had taken place.“This is very dangerous,” the woman almost screamed, imploring her husband to find another way.Trying the main road into Gimmel again, we found that it had opened in the interim, and we speed through the streets, its many empty buildings looming over us, their glassless windows striking me as malevolent eyes watching our passage.It is well known in the city that construction workers, including illegal ones, sleep in these buildings during the night, making their hollow shells seem all the more ominous.Thanking the couple and jumping out of their car at an intersection, I made my way to the site of the attack.Almost immediately, I ran into people I knew, including members of my own synagogue.It turned out that two Arab men had attempted to board a school bus. I was horrified but, at the same time, grateful that it had not been my daughter’s bus, which passes through Gimmel on its route. Failing to gain entrance, they then moved down the street, stabbing a young man before being shot themselves.Several residents expressed both shock and anger at the events, and there was a palpable sense that life in our “bubble,” separated from the traumatic events occurring in the cities to which many of us commute, was now popped.“I thought of Jerusalem and Tel Aviv as places to be scared. Not here,” said one.“Well, to everyone who ever posted ‘The problems are in Jerusalem. Nothing has ever happened in Beit Shemesh,’ Or ‘Let’s not be so fear mongering... Beit Shemesh has never had a problem!’… well the problems are officially ours now,” one resident posted on Facebook.After conducting interviews and going through the motions of my profession – and trying to suppress any hint of emotion in order to do my job with the objectivity required – I made my way back to the spot at which the attackers were taken down by the police.Acting mechanically without emotion, I knelt down on the street and began snapping pictures of the dark red pools of blood staining the sidewalk, checked my shots on the screen of my camera and then began walking home.As I walked away from the scene, I saw police checking a group of Arabs in a half-completed building. As the officers departed, I approached the men.“There is nothing to say. These things happen,” one of them said when asked what he thought of that morning’s attack, his arms thrown out in an expressive gesture of indifference.Again suppressing my emotions, I left Gimmel and made my way home.Locking myself in my bedroom, I began to write. Only after filing my story did I allow my hands to tremble.