The Israeli target was lightly injured as he defended himself. IDF soldiers neutralized the attacker without discharging their weapons. 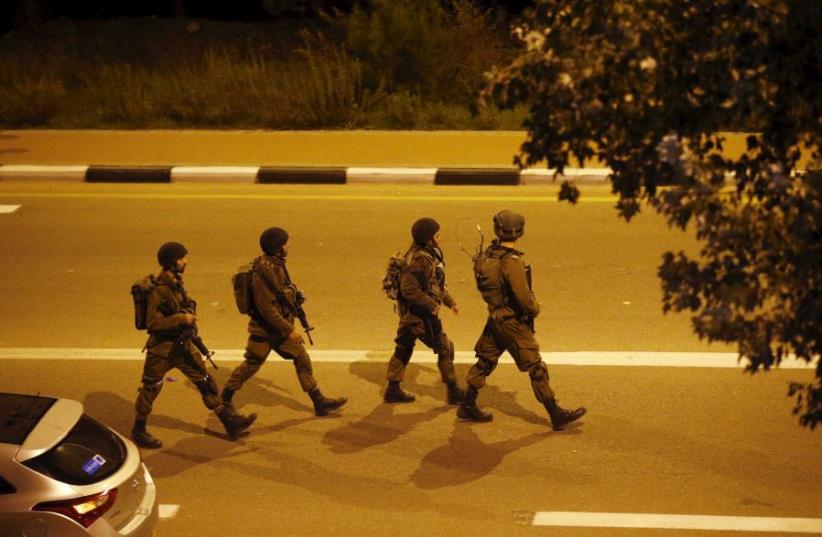 Israeli soldiers patrol near the scene of a Palestinian attack close to the West Bank Jewish settlement of Alon Shvut November 19, 2015.
(photo credit: REUTERS/Ronen Zvulun)
Advertisement
An attempted stabbing attack was foiled early Saturday morning near the West Bank settlement of Alon Shvut, according to the IDF.According to the reports, a Palestinian approached and attempted to stab an Israeli citizen. The Israeli managed to avoid being stabbed but was lightly injured as he tried to defend himself.IDF soldiers in the area soon arrived at the scene and neutralized the attacker without discharging their weapons.The attacker has been transferred to security forces for questioning.

A short while ago, a Palestinian armed w/a knife attempted to stab an Israeli civilian near the community of Alon Shvut, SW of Bethlehem.
— IDF (@IDFSpokesperson) June 17, 2017


The attempted stabbing comes only hours after a deadly attack in Jerusalem that claimed the life of a female Border Police officer, Hadas Malka.Islamic State claimed responsibility for the attack in a statement posted by Amaq, the group's news agency. The attack "will not be the last," said the statement.This is the first time that Islamic State has claimed responsibility for carrying out an attack in Israel. Gaza-based terrorist organization Hamas praised the bloodshed but disputed the Islamic State's claim, stating that the perpetrators were affiliated to the Popular Front for the Liberation of Palestine. Police said that the suspects used an "automatic weapon and knives" during the assault. Two individuals were also evacuated to Hadassah University Medical Center in moderate and light condition after sustaining wounds from the event. The hospital said it was treating another patient for shock.
Advertisement
Subscribe for our daily newsletter