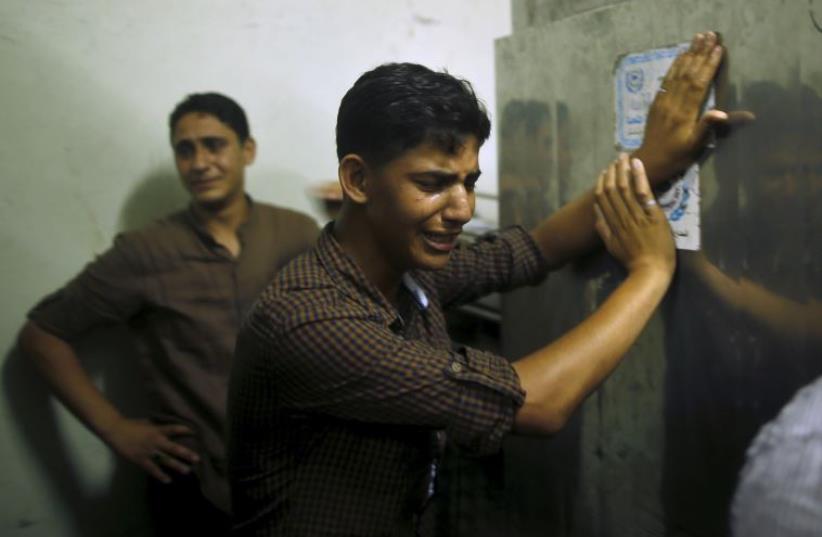 Friends of Palestinian teen Mohammed Al-Masri, 17, whom medics said was shot and killed by Israeli forces, mourn at a hospital morgue in the northern Gaza Strip
(photo credit: REUTERS)
Advertisement
Israeli soldiers shot dead a Palestinian teenager near the border fence in the northern Gaza Strip on Friday, Palestinian medical officials said.An Israeli military spokeswoman said several suspects approached the fence at two different points and did not heed calls by soldiers to stop. She said one group threw stones at the security fence and that soldiers fired warning shots in the air before firing at the "suspects' lower extremities."Gaza hospital officials identified the teenager as Mohammed al-Masri, 17.Israel enforces a 300-meter-(1,000-foot)-deep, security no-go zone on the Gaza side of the fence. The frontier has been largely quiet since a 2014 war between Israel and Palestinian militant groups in which more than 2,100 Palestinians and 73 Israelis were killed.In a separate incident in the West Bank, a Palestinian toddler was killed in a house fire set by suspected Jewish assailants. The attack drew anger and widespread condemnation from Palestinian and Israeli leaders, who denounced it as an act of terror. The United Nations, United States, European Union and other countries also denounced the attack and called for calm.