"This is not a soccer match with winners and losers." 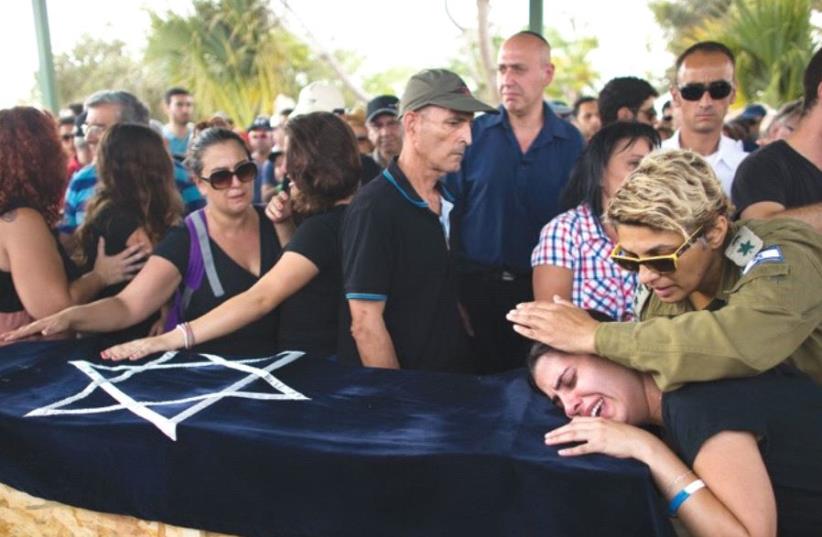 Relatives of Daniel Tregerman, a four-year-old killed in a 2014 mortar attack, mourn during his funeral near the border with the Gaza Strip
(photo credit: REUTERS/Ronen Zvulun)
Advertisement
While politicians point fingers after the release of the scathing State Comptroller Report on the 2014 Gaza war, residents of communities adjacent to Gaza criticized the government and expressed their hopes for the future.Nufar Margalit, 29, of Netiv Ha’asara, which sits on Gaza’s northern border, said the report did not come as a surprise. “We knew that there were tunnels,” she said, adding that “it can be hard to stay optimistic.”“You feel like you have a good home, a good place, a good community, but the fear is when you have kids, you don’t know what’s going to happen,” continued Margalit, who survived a rocket that landed on her home in 2005. “When you have kids, you don’t know if you will overreact with anxiety.”
Israelis near Gaza border fear underground tunnelling by Hamas
The report was highly critical of Prime Minister Benjamin Netanyahu and former defense minister Moshe Ya’alon, stating that the duo did not properly act upon intelligence they received on the threat of Hamas tunnels from Gaza.Alon Schuster, head of Sha’ar Hanegev Regional Council on Gaza’s western border, said that he was fed up with the political fighting that has erupted as a result of the report. “This is not a soccer match with winners and losers,” he stated. “The tunnels are a tactical problem, not a political issue. There are issues I have with the government on overall strategy and diplomacy, but handling the tunnels is technical.”Others explicitly accused the state of mishandling the war.“The government just does not take this region and its problems seriously, because of a disparaging attitude,” said Yonatan Shamreez, a 27-year-old student from Kfar Aza who spoke to Channel 2.Despite the critical findings in the State Comptroller Report and the ever-present threat of a renewed war between Israel and Hamas, residents of the Gaza border towns are continuing to live their lives with relative normality.Margalit is in the process of building a home her community. “I just got married and I am building a home, but we’re not sure if we will stay here when we have kids,” she said.