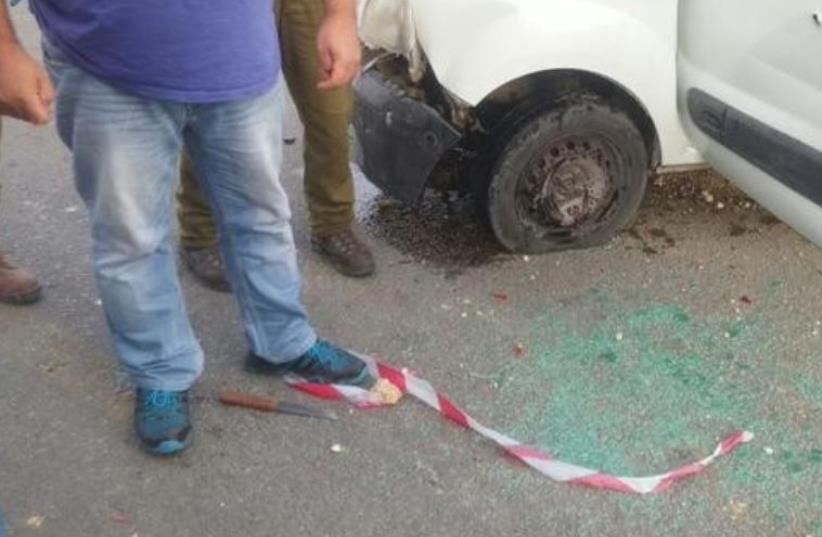 Knife at the scene of vehicular terror attack at Gush Etzion Junction
(photo credit: MAGEN DAVID ADOM)
Advertisement
Adalah – The Legal Center for Arab Minority Rights in Israel petitioned the High Court of Justice on Sunday to order the police and Public Security Minister Gilad Erdan to return the body of alleged terrorist Muataz Awisat to his family for burial.The NGO said in the petition that this should be done both as a general obligation and because the family signed on to the state’s conditions for the return on February 29.According to police, Awisat, 16, was shot dead by border police in the capital’s Armon Hanatziv neighborhood on October 17, when they asked to search him and he responded by trying to stab them. The family disputes the narrative and has wanted to have a private autopsy performed, to clarify the circumstances of the incident and so they can bury him.According to a document signed by police Supt. Yigal Almaliach and the family’s lawyer, Muhammad Mahmoud, the state was obligated to return Awisat’s body to the family “within days” of the February 29 signing.In return, the family committed to receiving the body between midnight and 1:30 a.m., taking it straight to the Jebl Mukaber Cemetery in southeastern Jerusalem, with a maximum of 30 family members present, no calls for incitement and a security deposit of NIS 20,000.The family says since it has agreed to the state’s conditions, there is no explanation for why six more weeks have passed without a return of Awisat’s body.In addition and although the family signed the agreement, the petition also states that the entire procedure of refusing to return body’s for burial unless such agreements are sighed is illegal.Citing the most fundamental right of the state’s Basic Laws, the right of the dignity of man, Adalah said that “the right of a human being to a prompt, respectful and decent burial is an inseparable part of the right to dignity, since the dignity of man is not only about dignity of man in life, but also the dignity of man in death.”It added that “political factors” were at the center of conditioning the release of Palestinians’ bodies to their families and that the High Court’s rulings make it clear that political factors cannot trump the dignity of man.Moreover, it said that there is no basis to claim there is a security issue, as any such claim must be based on an “existing and concrete security danger,” not a mere vague suspicion of the general impact of incitement.A senior government official responded that both Prime Minister Benjamin Netanyahu and Erdan have taken a clear stance that they will “not give back bodies without a promise of a quiet and small funeral at night, to avoid incitement supporting terrorism.” He added, “All of the current wave of violence is based on incitement...which also comes out of funerals.”Further, the official added that in the case of the attack on Tel Aviv’s Dizengoff Street on January 1, the state’s conditions were met promptly and the terrorist’s body was returned promptly to his family, proving that the police do not hold on to a body if the state’s conditions are met. That said, the source was not familiar with Awisat’s case and referred any more specific response to the police.The police in turn referred inquiries regarding the delay to the Public Security Ministry.Awisat’s is not the only case before the High Court. Supreme Court Deputy President Elyakim Rubinstein on Monday will hear petitions relating to nine other bodies of Palestinian attackers that have not been handed over to their families.