"Applying sovereignty to an area gives citizenship to all those living there," says president at Jerusalem Conference. 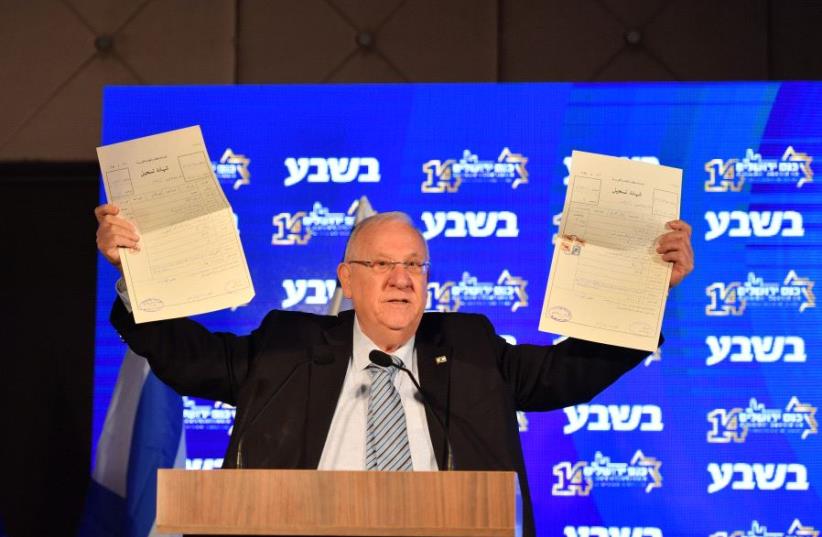 President Reuvin Rivlin holds land deeds he purchased from a Palestinian in the West Bank 40 years ago while speaking at the Jerusalem Conference
(photo credit: YISRAEL BARDOGO)
Advertisement
President Reuven Rivlin on Monday said he supports the full annexation of the West Bank in exchange for complete Israeli citizenship and equal rights granted to Palestinian residents.Stating that he believes “Zion is entirely ours,” and that “the sovereignty of the State of Israel must be in all the blocs,” at the opening day of the 14th Jerusalem Conference, Rivlin may have tested the waters for the one-state solution he has long championed.“It must be clear: If we extend sovereignty, the law must apply equally to all,” he told a packed auditorium of mostly right-wing participants attending the two-day symposium at the capital’s Crowne Plaza. “Applying sovereignty to an area gives citizenship to all those living there.”“There are no separate laws for Israelis and for non-Israelis,” Rivlin said.While the president condemned the recently passed Settlement Regulation Law, which retroactively grants ownership of thousands of contested Jewish homes built on Palestinian-owned land in the West Bank, he nonetheless expressed the importance of Israeli sovereignty.
Knesset passes settlement bill on February 6, 2017 (credit: REUTERS)
On Sunday, Haaretz reported that Rivlin dismissed the law, which is likely to be overturned by the High Court, for engendering an “apartheid state.”Still, while holding a 40-year-old Arabic deed proving his purchase of land in the West Bank – which was contested by the seller, before Rivlin won a protracted court case in Ramallah verifying his ownership – he proudly asserted: “This Ashkenazi is registered in Ramallah.”Meanwhile, Jerusalem Affairs Minister Ze’ev Elkin, who also spoke on the dais on Monday, cited the importance of expedited construction beyond the Green Line under the Trump administration, to make up for de facto building freezes during Obama’s two terms.“It’s obvious that there is much more understanding by the new American administration regarding the issue of an undivided Jerusalem, and the need to build in the capital,” he said. “The Jewish majority is only a little over 60%, so we need to build at least 4,000 flats every year to accommodate the Jewish population.”Noting that a fraction of that amount was built during eight years under the Obama administration due to American intervention, Elkin said he is hopeful that Trump recognizes the importance of accommodating the city’s growth by building beyond the 1967 lines.“One of the big challenges now is that if we want to keep Jerusalem as the capital of the Jewish State, we need to build 6,000 flats every year to make up for the last eight years,” he said. “It’s a strategic issue for us, and I hope the new administration will understand that the future of Jerusalem depends on our possibilities to build, and build a lot.”Apart from housing, Elkin cited the ongoing development of east Jerusalem as a major challenge.“If we want to prove that Jerusalem is an undivided city, we need to improve east Jerusalem in deed, and not just declarations,” he said. “That means much more implementation of our sovereignty there, including implementation of Israeli law.”Of particular concern to Elkin is the present curriculum in Palestinian schools in the capital, which he said must be radically overhauled to eliminate antisemitic and anti-Israel content.“The content of the education system in east Jerusalem is established by Ramallah, and it is unacceptable from our point of view,” he said. “A whole generation of Arabs in east Jerusalem have been educated since the Oslo Agreement with anti-Jewish and anti-Israel propaganda. This is exactly the reason the last wave of terror saw the majority of terrorists come from east Jerusalem for the first time in our history.”Elkin continued: “If we want to change this, we need to first change the educational system of east Jerusalem, and we need to invest a lot of money in its infrastructure.”In terms of the capital’s ailing economy, the minister noted the importance of creating more hi-tech and biotech jobs, which he said will help make the capital a “start-up city.”“Our approved five-year plan is to invest NIS 850 million into creating jobs, compared to NIS 350m. in previous years,” he said. “You can see that the government is investing much more in the capital to attract hi-tech companies and create new jobs.”While Elkin noted that he disapproved of Jerusalem Mayor Nir Barkat’s handling of the municipality’s NIS 800m. shortfall of funding from the Finance Ministry, which resulted in a second sanitation strike in two years, he said he is optimistic the matter will be resolved shortly.“I succeeded to stop the strike, and I’m very proud that we brought everyone to the [negotiating] table, but we need to find a solution for the municipality’s budget not just for this year, but going forward, as well,” he said.The 14th annual Jerusalem Conference features a wide array of the government’s highest-ranking officials to examine several key variables concerning the country, and capital, as it marks its 50th year after the Six Day War.Hosted by the Besheva Media Group, the conference will continue on Tuesday between 9 a.m. – 6 p.m.