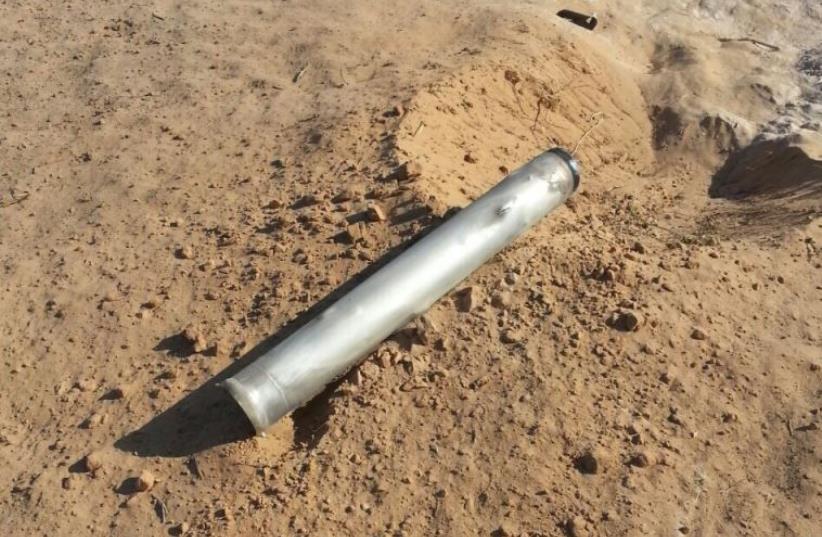 Remnants of a projectile that landed in open territory in southern Israel, July 3, 2015
(photo credit: Courtesy)
Advertisement
Two projectiles fired at southern Israel exploded in open territory in the Negev desert on Friday, causing 'code red' sirens to sound in communities in the vicinity. No injuries or damage were reported. Police confirmed that remnants had been located at two landing sites.Investigators were attempting to determine whether the launchings emanated from Gaza or the volatile Sinai Peninsula, although estimates pointed to the latter.Egyptian security sources told Reuters they were investigating the reports and said there was no immediate evidence a rocket was launched from Egyptian territory.The IDF said it was looking into the attack. Fierce clashes between Egyptian forces and Islamic State-linked fighters have raged in the Sinai in the past few days after  Islamists carried out a string of attacks that killed at least 100 people in the peninsula.On Sunday, sirens rang out in the Hof Ashkelon area sending Israelis running for shelter. The IDF said no rockets fell inside Israel and later determined that the sirens had been a false alarm.Sunday's occurrence came after multiple recent rocket launchings toward Israel by terrorists in Gaza broke the relative quiet since last August's cease-fire ending a 50 day conflict between Israel and Hamas.Reuters contributed to this report.