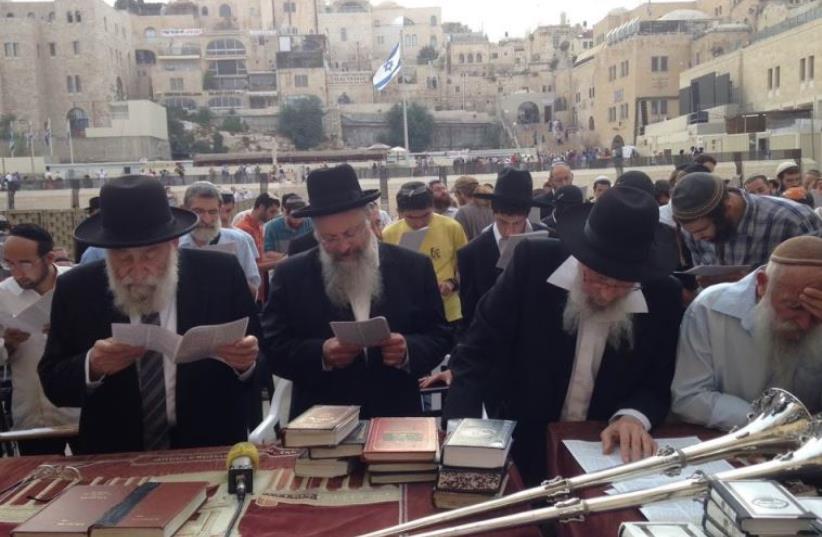 Municipal chief rabbi of Safed Rabbi Shmuel Eliyahu (C), municipal chief rabbi of Jerusalem Rabbi Aryeh Stern (L) and Temple Institute Rabbi Yisrael Ariel (R) at a prayer rally at the Western Wall
(photo credit: JEREMY SHARON)
Advertisement
Municipal chief rabbi of Safed Rabbi Shmuel Eliyahu said on Monday that the state was not taking firm enough action to deter terror attacks, and declared that the enemies of the Jewish people needed to be “destroyed and crushed” in order to halt the wave of terrorism.The rabbi was speaking after a prayer rally at the Western Wall attended by several hundred men and women and organized by Eliyahu due to the ongoing wave of terrorist attacks that have been taking place around the country.Also present at the rally was the municipal chief rabbi of Jerusalem, Rabbi Aryeh Stern, and hardline national-religious leader and head of the Temple Institute Rabbi Yisrael Ariel.A lengthy service of psalms and prayers was recited, and silver trumpets, created by the Temple Institute, which prepares vessels and other requirements for the building of the third Temple, were blown at several stages of the rally.Ariel said the trumpets were blown in Temple times during times of war and distress for the Jewish people.Speaking to The Jerusalem Post at the rally, Eliyahu praised the security services for carrying out their tasks and said the purpose of the rally was to allow “us, the simple people, to cry out to God because the power of the Jewish people is the power of prayer.” The rabbi said, however, that the state was not taking firm enough action to deter attacks.“We are in a time of distress and our enemies have risen up to slaughter us,” said the rabbi. “They have nothing else. It doesn’t matter [who they target] as long as they’re a Jew. They want to spill our blood like water,” he said.“If our enemies are continuing to raise up knives to us in Jerusalem it means we’re not acting as is necessary. The fact that there are terrorists that are still coming out alive after committing terrorist acts means that we haven’t understood that we’re in a war, and we need to destroy these enemies.“Should we leave them alive in order to then free them in another gesture to [Palestinian Authority President Mahmoud Abbas]? The fact that they still have a desire [to commit terrorist attacks] shows that we’re not operating strongly enough,” he said.Eliyahu also rejected claims that the current wave of terrorism was caused by the increasing number of Jewish visitors to the Temple Mount or other events related to the site.“Their terrorism didn’t start with visits to the Temple Mount. When Jews started to pray at the Western Wall that was also a reason for terrorism. They murder because they are murderers. They are killing their brothers in Syria, they drag people through the streets in Libya, they throw people off buildings in Gaza, they immolate people in fire. They are the same people who are raising their knives to us here.”Eliyahu is himself a deeply controversial figure and has a history of rhetorical attacks against the Arab population in Israel. In 2006, he was indicted for racial incitement for comments he made in 2002 and 2004, but the charge was conditionally dropped when the rabbi apologized for his comments, retracted them and pledged not to make similar comments in the future.Stern declared after the rally that “today we have proved again that Jewish spirit will defeat Muslim terror.”Continued the rabbi “Jerusalem was and will remain the eternal capital of the Jewish people and no terror or violence will break the Jewish spirit which has proved many times to be stronger than any violence or murder.”