Sara Netanyahu: We invest in protecting our children, our enemies invest in terrorism 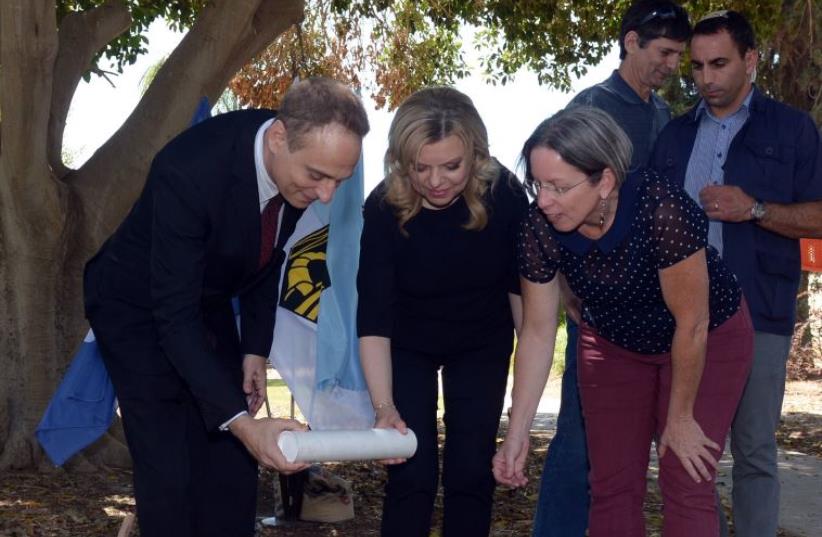 Sara Netanyahu lays cornerstone for Children's Center in honor of Daniel Tragerman
(photo credit: CHAIM TZACH/GPO)
Advertisement
Sara Netanyahu laid the cornerstone of a Children’s Center in honor of Daniel Tragerman at Kibbutz Nahal Oz on Wednesday.Four-year-old Tragerman was the youngest casualty of Operation Protective Edge last summer.A Gazan mortar shell, fired from near a UN school, killed him on August 22, 2014, as he played with his younger siblings in a tent inside the family’s home at the kibbutz.“This ceremony is happy and sad in anticipation of the anniversary of Daniel’s death, the very establishment of this Children’s Center will provide a place to play and live with absolute protection,” the wife of the prime minister said at the ceremony.Netanyahu read the letter that her husband had sent the Tragerman family after their son’s death last summer, and spoke about the day of the attack.“You all probably remember that Friday, the rage and all the difficult feelings that are hard to describe. Daniel became a child of the entire Israeli nation, and your determination is admirable,” Netanyahu told the kibbutz members in attendance.“Thanks to your bravery, it is possible for all of us to exercise our right to live in this land.The inauguration of the center highlights the differences between we, who think about life, as opposed to them, the enemies who devote themselves to a terrorist industry of death and destruction,” Netanyahu continued.The center, at a cost of $100,000, will be protected from rockets and have bathrooms and a kitchen area, so children can stay in the facility when rocket sirens sound.The center is being built by Keren Hayesod – United Israel Appeal as part of a larger effort to strengthen the Gaza periphery. At a cost of some $6 million, the UIA is renovating 70 bomb shelters and building 270 portable street shelters, in addition to funding educational assistance, psychological assistance, and fun days and camps for children.