Senator Schumer calls on Trump to press Abbas on incitement

Will Trump take Abbas to task? 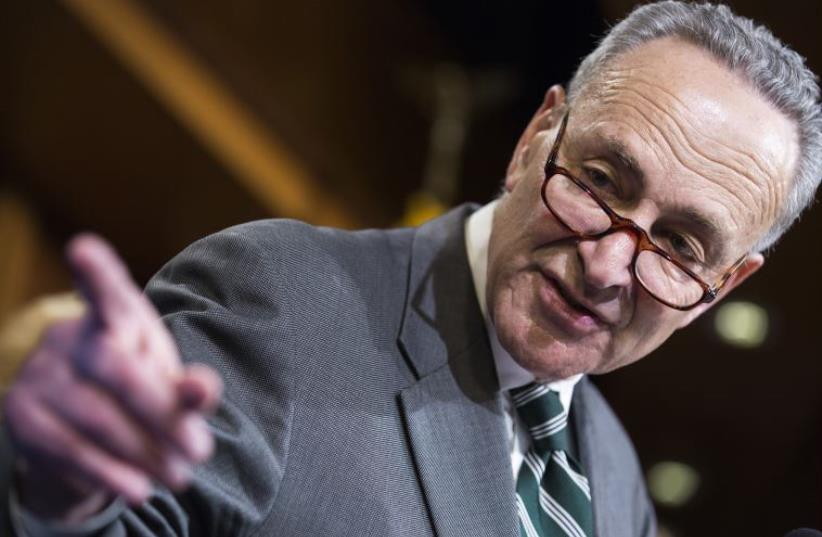 Senator Charles Schumer (D-NY) speaks after a vote on legislation for funding the Department of Homeland Security on Capitol Hill in Washington
(photo credit: REUTERS)
Advertisement
United States Senator Charles Schumer, the Democratic leader in the Senate, called on President Donald Trump to press Palestinian Authority President Mahmoud Abbas to “immediately” end incitement when they meet.“If President Trump plans to use this gathering to help pave the way towards peace between the Israelis and Palestinians, he should urge President Abbas to immediately pursue a new path,” Schumer, D-N.Y., said in an email to JTA on Monday evening, the eve of Trump’s meeting with Abbas in Bethlehem.Schumer, who is Jewish and close to pro-Israel groups, called on Trump to demand that Abbas end the practice of paying subsidies to the families of Palestinians who are jailed or who have been killed and who have carried out attacks on Israelis. He also said the Palestinians should stop naming streets and institutions after terrorists, and should enhance education for coexistence.“It is perfectly fine for textbooks to celebrate one’s own cultural heritage and accomplishments, but it is simply unacceptable for those same textbooks to teach false narratives, promote antisemitism, and deny Israel’s right to exist,” he said.Trump, who had a warm reception on Monday in his meetings with Israeli Prime Minister Benjamin Netanyahu and President Reuven Rivlin, and who visited the Western Wall, has decried reports of Palestinian incitement.However, he did not take Abbas to task publicly on the matter when they met earlier this month at the White House. A White House readout of their meeting said Trump raised it privately.