Assad carried out Khan Sheikhoun gas attack out of frustration, the official stated. 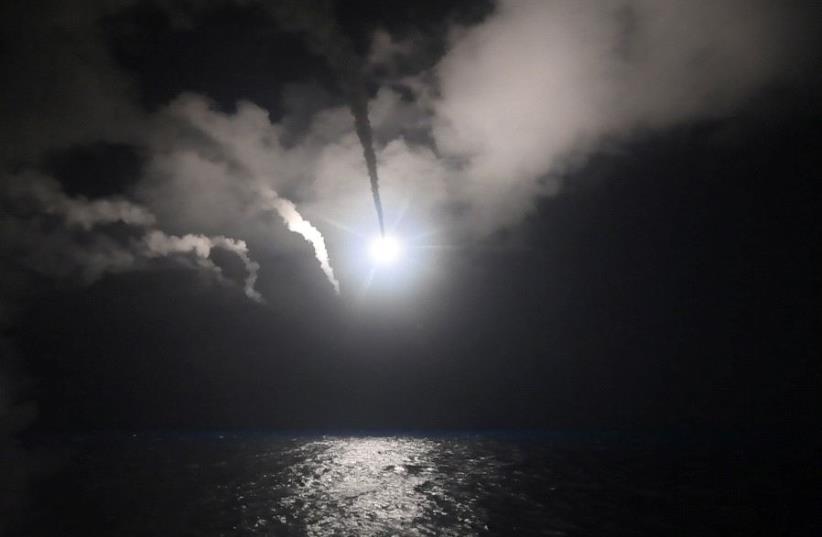 US Navy guided-missile destroyer USS Porter (DDG 78) conducts strike operations while in the Mediterranean Sea which US Defense Department said was a part of cruise missile strike against Syria on April 7, 2017
(photo credit: REUTERS)
Advertisement
The United States warned Israel two hours before US warships in the eastern Mediterranean Sea fired 59 Tomahawk cruise missiles against the Syrian regime’s Al Shayrat Airbase, a senior IDF official said on Wednesday.Following the strikes, the IDF’s Spokesperson’s Unit released a statement saying that Israel’s military had been briefed in advance and expressed its support for the strikes. Speaking to military journalists at the IDF headquarters in Tel Aviv, the senior official confirmed that the IDF had been warned about the US strike against the base where warplanes that carried out the deadly Khan Sheikhoun chemical gas attack were based.While the Syrian military continues to deny responsibility for the attack, blaming the rebels and stating that it would never use chemical weapons, “it is hard to imagine that Assad did not know about the attack in advance. And the price he’s paid for it is severe. He’s lost all legitimacy,” the senior official said.The Assad regime agreed to dismantle the country’s chemical weapons stockpiles in a 2013 deal brokered by the United States and Russia following the regime’s deadly attack on East Ghouta near the capital of Damascus where over 1,400 people were killed, including 426 children.While the regime did comply by removing much of its stockpiles of chemical weapons – over 1,290 metric tons of sarin, VX and sulfur mustard, a precursor to mustard gas – as well as dismantling the infrastructure to produce them, according to the senior official, the Assad regime still has residual amounts – between one to three tons – of the deadly chemical agent.deadly chemical agents.
Netanyahu: Israel welcomes US airstrikes in Syria (credit: GPO)
According to him, the Assad regime had carried out the Sarin gas attack against the town of Khan Sheikhoun, killing close to 100 civilians, out of frustration that despite the significant help Syria is getting from Russia, Iran and Hezbollah, regime troops are unable to make any serious advances on the ground.While two years ago Iran may have been closer to achieving hegemony in Syria, there is now Russian hegemony in West Syria, he said, but “even with support from the Russians and Hezbollah, Assad cannot control the entire country. His forces are gaining ground in western Syria but it is hard to see him controlling the entire country.”The senior IDF official said that it is unlikely that there will be a political settlement to the Syrian conflict in the near future.“The Syria we once knew is gone and will never be again,” he added.