The modular structures with cement floors located within the boundaries of the Kfar Adumim settlement were built in 2015 and house Palestinian Beduin. 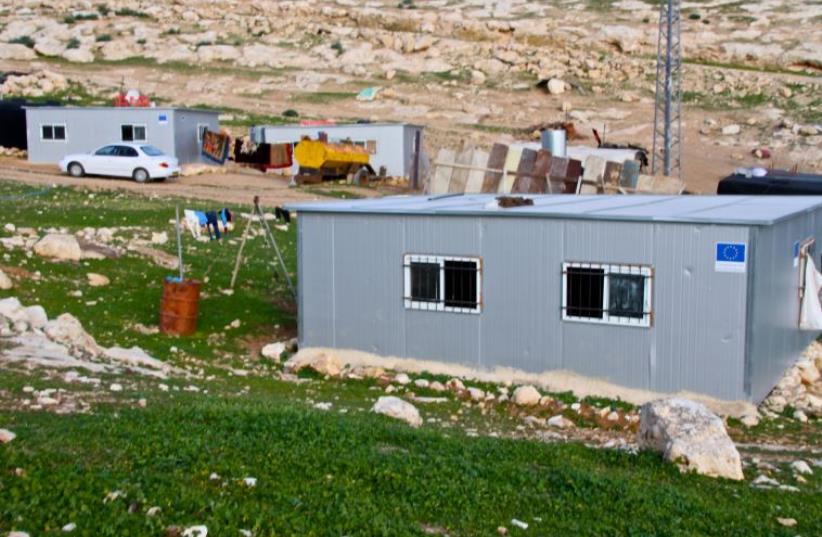 Illegal EU funded Palestinian structures in the area of Kfar Adumim.
(photo credit: TOVAH LAZAROFF)
Advertisement
Settlers on Monday asked the High Court of Justice to order the demolition of 15 Palestinian homes in Area C of the West Bank, which they say are illegal and funded by the European Union.The modular structures with cement floors located within the boundaries of the Kfar Adumim settlement were built in 2015 and house Palestinian Beduin.The settlement and the non-governmental group Regavim, which monitors illegal Palestinian building, are the co-petitioners. They asked the state to force the Civil Administration to remove the structures, which they said were built illegally on state land. They presented photos of the structures, which have signs on the walls with the EU logo.The petition comes as the international community, including the EU and the US, is pressuring Israel not to demolish illegal Palestinian buildings."We had no choice but to turn to the High Court of Justice because the Defense Ministry and the Civil Administration failed to respond to us [on this matter]," Regavim said in a statement. It noted that illegal building was a criminal offense.By funding such construction, it said, the EU is acting unilaterally in Area C to help the Palestinian Authority annex that territory for its future state."The criminal intervention of foreign governments in territory under the responsibility of another nation should not be tolerated," it added, explaining that such action is a breach of both the Oslo Accords and agreements reached between Israel and the Palestinian Authority.The NGO asked the court to force the government and the Civil Administration to take measures to ensure that the homes will be razed, restitution made and criminal proceedings opened against the EU in spite of its diplomatic immunity.The petition was also directed against Prime Minister Benjamin Netanyahu, Defense Minister Moshe Ya'alon, OC Central Command Gen. Roni Numa, and Civil Administration head Brig.-Gen. David Menachem.Regavim filed the petition as part of its ongoing campaign against illegal Palestinian building and EU funding of such building. Earlier this year it submitted a petition against a Palestinian school in the area of the Adam settlement that it said had been built illegally with EU funding.In response to past charges by Regavim, the EU has said its activities to support Palestinian building in the West Bank were humanitarian gestures recognized under international law.