The group will gather at the entrance to the Neveh Tzuf settlement, otherwise known as Halamish, which is located just across the road from Nabi Saleh. 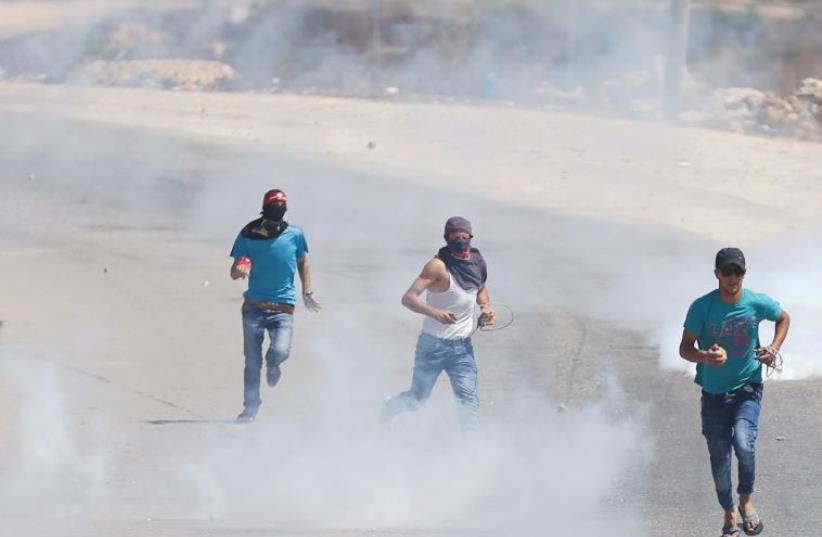 PALESTINIANS RUN after IDF troops fired tear gas during clashes after a demonstration in Nabi Saleh
(photo credit: REUTERS)
Advertisement
Right-wing activists and settlers plan to stage a protest on Friday on the outskirts of the Nabi Saleh village, 20 km. northwest of Ramallah, to counter the weekly Palestinian demonstrations held there.Led by Beit Aryeh Council head Avi Naim, the group will gather at the entrance to the Neveh Tzuf settlement, otherwise known as Halamish, which is located just across the road from Nabi Saleh.Naim said he was inspired to hold the rally in support of soldiers after he saw a video that went viral from last Friday’s demonstration in which women and children from Nabi Saleh attack a soldier as he tried to arrest 11-year-old Muhammad Tamimi, whose left arm was visibly in a cast.The video shows a partially masked soldier with one hand on a rifle and another on the neck of a terrified-looking boy.Palestinians from Nabi Saleh have held weekly demonstrations against Israel’s presence in the West Bank as well as what they term settler “land expropriation” since 2009.Most of the demonstrations end with Palestinians throwing stones at soldiers and soldiers firing tear gas to disperse the crowd.The time has come to stop these Palestinian demonstrations, not just in Nabi Saleh but elsewhere in Judea and Samaria, Naim said, adding that the IDF should use collective punishment against villages that hold these vilolent rallies.Soldiers are pitted against the protesters without adequate support, he said, particularly given that protesters often create negative videos of them that are then posted on the Web, such as occurred on Friday.On Wednesday, Palestinian Authority President Mahmoud Abbas hailed Tamimi and the rest of his family heroes. Last Friday, at his office in his Ramallah headquarters, known as the Mukata, Abbas received Tamimi and his family, including his sister Ahed, 14, and mother, Nariman, who was seen racing to his aid in the video and helping to beat the soldier.He thanked them for their courage in “fighting for their land” and in “confronting the tyranny of the occupation.”Such “popular peaceful resistance” is a powerful weapon in the hands of the Palestinian people, Abbas said.