In one instance last month, following daily prayers during Ramadan, police said a Jewish couple was attacked by a group of assailants, one of whom used brass knuckles. 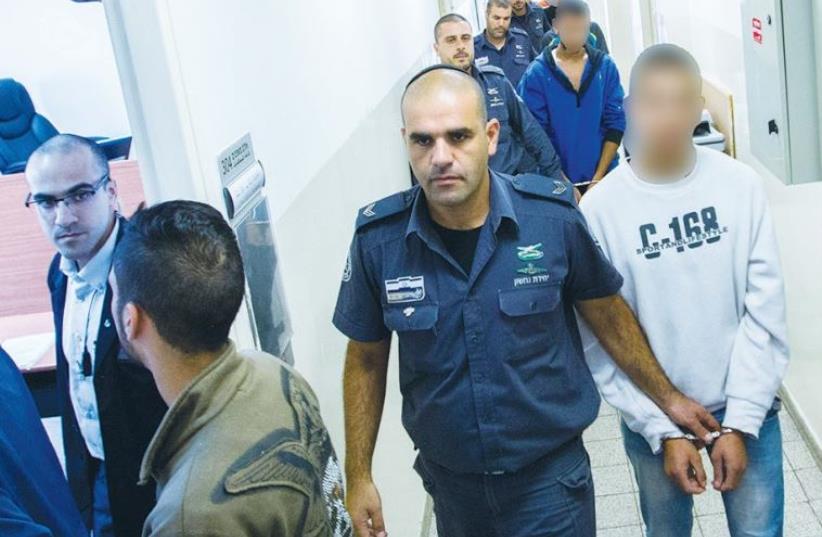 7 arrested in Jerusalem beatings
(photo credit: FLASH90)
Advertisement
Following an intensive investigation into a string of recent assaults on Jews strolling Jerusalem’s popular Sherover Promenade overlooking the Old City, police said on Wednesday that seven Arabs suspected in the attacks have been arrested.“These were serious attacks against civilians hoping to simply enjoy themselves,” a police statement said. Three minors and four adults were arrested – three of whom live in the nearby Abu Tor neighborhood.In one instance last month, following daily prayers during Ramadan, police said a Jewish couple was attacked by a group of assailants, one of whom used brass knuckles. Three days later, police said a Jewish man was beaten by at least five Palestinians, who also took his kippa from his head.Jerusalem District police head Asst.-Ch. Moshe Edri said an intensive undercover investigation was launched after a pattern of violence was recognized.“The professional and determined work of Jerusalem’s Central Unit, combined with the operational district forces and Jerusalem Border Police units, led to the rapid arrest of the suspects,” he said in the statement.Meanwhile, Abu Tor resident Bonnie Brooks, who strolls down the promenade daily with her husband to walk their three dogs, said on Wednesday that lax security and subpar municipal maintenance of the area has led to the current situation.“We walk on the promenade with the dogs and go out of our way to talk to people and be friendly, but this is long in coming,” she said.“The problem has been that there’s not enough security. There are younger guys that are denizens; they park their cars on the promenade, burn things and ride horses. Thank goodness something is being done before anyone gets really hurt.”However, Brooks emphasized that the majority of Arab visitors to the promenade include young families, who are peaceful and friendly.“I don’t get frightened,” she said. “I say hello to everyone and they say hello back. But we do see young people there that have an edge to them, so you know something can happen if there’s a confrontation.”Brooks said she holds the municipality accountable for not affording more resources to protect and maintain the promenade sooner.“This situation was waiting to happen, and it has everything to do with security shortcomings; for not taking care of the park and letting it fall into disrepair.And that’s true for Central Park and all other parks.” she continued.“Our security has been a problem there for a while, and I’ve been telling people that if you don’t take care of something, it will be taken over.”Still, Brooks said the municipality is presently installing several street lights on the promenade, as well as security cameras.“Things seem to be improving there now,” she said. “But it shouldn’t have taken so long to address.”