By DANIEL K. EISENBUD
DECEMBER 14, 2015 15:08
Scene of Jerusalem ramming attack
Advertisement
Eleven people were wounded – including a baby boy – in a vehicular terrorist attack carried out by an east Jerusalem Palestinian man near the Central Bus Station in Jerusalem on Thursday afternoon. Police shot dead the Palestinian assailant while he was still inside his car.At approximately 3 p.m., the suspect, identified by Palestinian media as Abd al-Muhsam Hasuna, 24, of Beit Hanina, drove his vehicle into a large group of pedestrians waiting at a bus stop on Herzl Street, adjacent to the iconic Bridge of Strings, said Police spokesman Micky Rosenfeld.“Officers and security personnel patrolling the area responded immediately and neutralized the terrorist as he attempted to exit the car with an ax, killing him,” Rosenfeld said minutes following the attack. “Of the 11 injuries, one victim is a 68-yearold woman, and another is  a one-and-a-half-year-old baby who was also seriously injured and taken to the hospital.”
Car ramming attack near Jerusalem"s Chords Bridge
.Both are in satisfactory condition; the nine others are in good condition.”Rosenfeld said all of the victims were treated at the scene by Magen David Adom and ZAKA paramedics before being rushed to Jerusalem’s Shaare Zedek Medical Center and Hadassah University Medical Center in Ein Kerem.Miri Krimolovsky, a reporter for Israel Radio, said she witnessed the assailant’s car jump the curb and plow into the group on the sidewalk before police and security officers killed the man behind the wheel.“I was about to turn left to Tel Aviv, [when] suddenly a car went up onto a bus stop, shots were immediately fired,” she said. “There are people in the stop... A number of people simply lifted the car because there were people underneath it.”Rosenfeld said traffic was suspended in both directions for 90 minutes, as police cordoned off the area – which was flooded by a smashed fire hydrant – to investigate whether the suspect acted alone or as part of a larger terrorist cell. A search of the man’s badly damaged vehicle uncovered an ax.ZAKA volunteer Yossi Frankel said he was among the first responders at the scene.“The terrorist ran his car into a bus stop, ramming a fire hydrant, which made it very difficult to work because of flooding,” said Frankel. “I helped one male victim, who is between 30 and 40 years old, who was conscious with light-to-moderate upper body wounds. A oneand- a-half-year-old baby was also seriously injured and taken to the hospital.”Hadassah University Medical center spokeswoman Hadar Elboim said early Thursday evening that the baby, who was placed on a ventilator, was rushed into surgery in the pediatric trauma unit in an attempt to save his leg from being amputated.“He’s in surgery now and is in very serious condition,” said Elboim around 6 p.m. “But if anyone knows how to deal with this, it’s the doctors in this unit. They had to take him directly into surgery; they couldn’t wait.” She said the 10 remaining victims were all in good condition, and likely would be discharged by Tuesday morning.Frankel said ZAKA volunteers transferred the terrorist’s body to an area police station for forensic analysis and testing.Following the attack, Prime Minister Benjamin Netanyahu praised the security forces and citizens who helped save lives.“We are facing a new kind of terror, that of individuals,” he told his Likud faction on Monday afternoon. “This presents a challenge, not only to us, but the entire world. I have no doubt we will overcome [the challenge].”On Monday evening, Netanyahu issued a directive to fortify hundreds of bus stops in Jerusalem and protect them against the types of attacks that took place earlier in the day. The police and Transportation Ministry will determine the list of bus stops to receive special protection.The order came during consultations he held following the attack with Public Security Minister Gilad Erdan, Transportation Minister Israel Katz and Jerusalem Mayor Nir Barkat.Barkat also lauded the people on the scene for acting quickly to subdue the terrorist and prevent further injuries, and urged residents to not allow terrorism to force them to live in fear.“As soon as possible, we must get back to routine, to not give them a [sense of] achievement,” he said. “With all the pain of those injured, we must do this.”Following an emergency security meeting with the Transportation Ministry Monday night, Barkat presented Katz with a NIS 2 million plan to protect civilians at high-risk bus stops throughout the capital.“Katz welcomed the initiative and promised to work with the municipality and Finance Ministry to get the budget needed to put this plan into practice,” Barkat said in a statement.A poll recently published by the Palestinian Center for Policy and Survey Research found that 67 percent of Arab respondents supported stabbing attacks against Israelis and that, if the attacks were increased, they “would serve Palestinian national interests in ways that negotiations could not.”In the meantime, Rosenfeld said police will continue to operate at the highest level of alert throughout the capital.Gil Hoffman, Herb Keinon and Reuters contributed to this report. 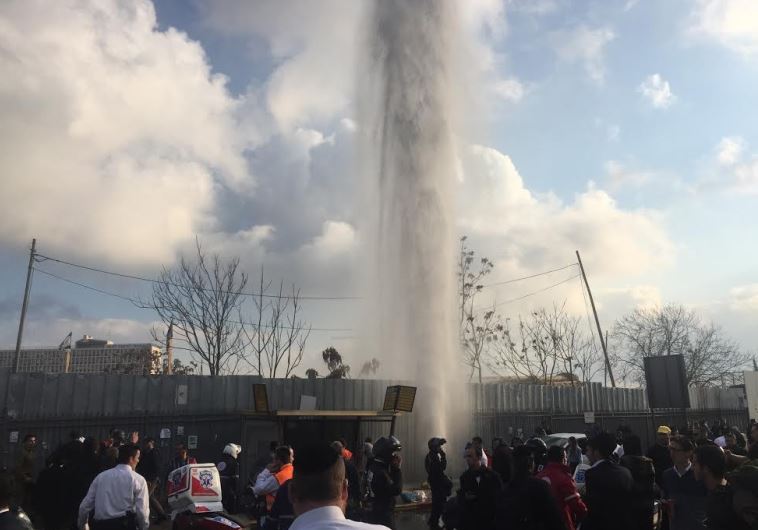 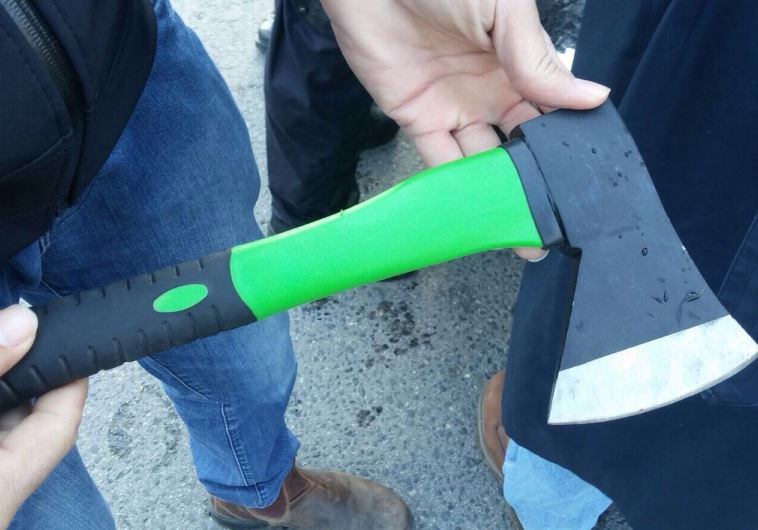 Axe found in the car of the terrorist (photo credit: ISRAEL POLICE).Gil Hoffman, Jerusalem Post Staff, and Reuters contributed to this report.