Sgt. Elchai Teharlev laid to rest: 'Now you have flown to the sky'

The 20-year-old was posthumously promoted to sergeant and laid to rest at the Mount Herzl Military Cemetery in Jerusalem. 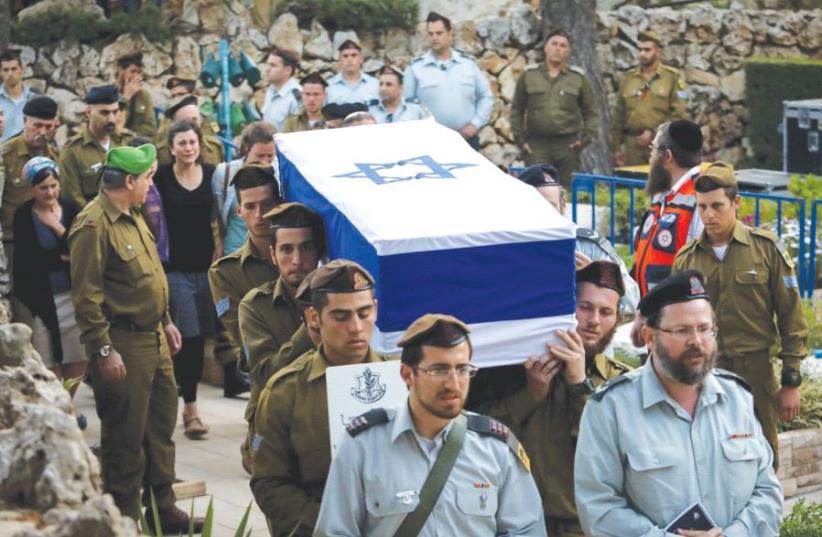 Soldiers carry the coffin bearing the body of Sgt. Elchai Teharlev at Jerusalem’s Mount Herzl Military Cemetery
(photo credit: FLASH90)
Advertisement
When the funeral was over, nobody wanted to leave.Twenty-year-old Elchai Teharlev, loved to sing and play music. In one of the photographs his family released after his death, he can be seen standing on the edge of a hilltop with a guitar strapped over his shoulder.On Thursday, several thousand people stood shoulder-to-shoulder near his freshly dug grave as the sun set, singing and humming soulful religious tunes.A friend of Elchai’s stood on a stone wall above them, quietly strumming a guitar, as cold gusts of wind blew through the air above Mount Herzl Military Cemetery in Jerusalem.
Funeral of IDF soldier Sgt. Elchai Taharlev , killed in car ramming terror attack near Ofra on April 6, 2017 (TOVAH LAZAROFF)
His father, Ohad, recalled how imaginative Elchai had been as a small child. “You made yourself some wings. You wanted to jump from the window so you could fly to the sky. Now you have flown to the sky,” he said in a tearful voice.Earlier in the day, Ohad, a well-known rabbi and head of the Israeli program at the Lindenbaum Seminary, spoke with reporters about the first moments after his son was killed in a car-ramming attack, around 10 a.m.Elchai, who was an IDF sergeant, stood guard at a bus stop outside of the Ofra settlement when a Palestinian terrorist ploughed into him with his car.Upon hearing of the incident, Ohad tried to call his son, but there was no answer. He then called one of Elchai’s friends. When the friend stammered and did not respond, Ohad said, “I understood clearly what had happened.”He headed home to the Talmon settlement, arriving just as an army officer pulled up to his door to deliver the news.Wearing a torn shirt as a sign of mourning, Ohad described his son as a creative, spiritual and giving young man who was filled with life and had a ready smile.“You had the type of smile that melted the hearts of anyone who was near you,” said Ohad of his son, the middle child of seven siblings. When you were little you would catch the candies that were thrown and give them to the children who could not catch them,” he said.“We didn’t have time. Everything happened so fast. We refuse to believe we are parting,” said Ohad. “You were an angel and you were taken from us as an angel.”Elchai is the third terrorism victim from Talmon in the last 13 years. Three years ago, the community lost Gil-Ad Shaer, 16, who was one of three teenagers kidnapped and murdered by Hamas in June 2014. Both Elchai and Gil-Ad studied at the Mekor Chaim Yeshiva in Kfar Etzion.