Suspects confess to committing the acts, noting it was in response to the "heinous" terror attack at Sorona Market. 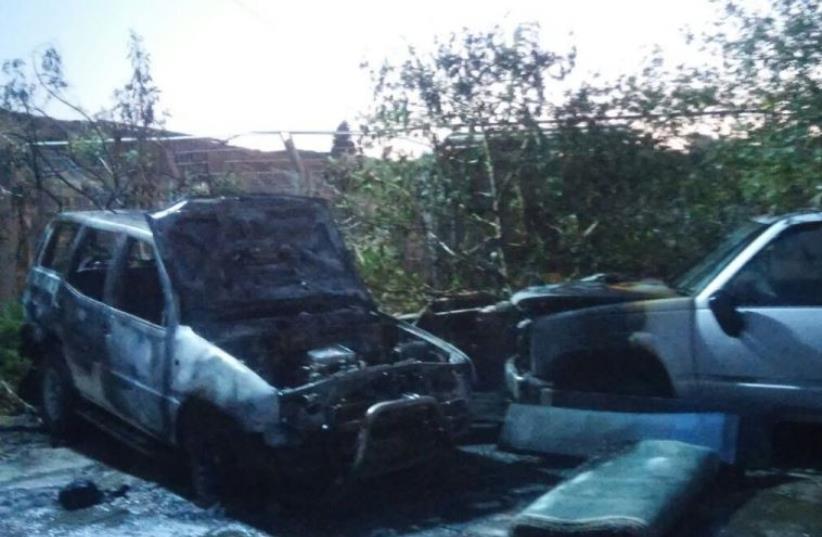 Vehicle burned by Jewish suspects in a revenge attack against Palestinians for the June 8 shooting at Tel Aviv's Sarona Market
(photo credit: POLICE SPOKESPERSON'S UNIT)
Advertisement
The Shin Bet (Israel Security Agency) arrested three Jewish minors on suspicion of carrying out and plotting violent attacks against Israeli-Arab citizens.According to the intelligence agency, the youths decided to act after the deadly June 8 gun attack by Palestinian terrorists on civilians in Tel Aviv’s Sarona Market, which resulted in four dead and several wounded.The minors stand accused of torching a vehicle belonging to an Arab-Israeli in the village of Yafia, located near Nazareth, on June 10.The Shin Bet added that the youths had defaced a second vehicle belonging to an Arab-Israeli man by spray-painting the words “Price Tag” and “Revenge” on the victim’s car.During questioning, the suspects confessed to committing the acts, the Shin Bet said.The suspects allegedly plotted their actions for a long time, in response to Palestinian terrorist attacks that occurred recently, though it was the Sarona attack that acted as the final trigger, the Shin Bet said.Links between the suspects and radical hilltop activists in the Binyamin and Samaria region were also uncovered, the Shin Bet said, particularly activists from the Geulat Zion outpost, near Adi-Ad.The Shin Bet said the investigation formed another chain in a series of measures aimed at thwarting Jewish terrorist cells over the past two years. The measures have “led to a significant drop in the scope and severity of violent incidents and terrorism committed against Palestinians and Arab citizens of Israel,” the agency added.Northern District prosecutors will, in the coming days, charge the cell’s members.In January, the Shin Bet released details about what it said was a radical ideology guiding a small number of Jewish radical operatives. A manifesto titled “The Kingdom of Malice,” written by a radical operative, and obtained by the Shin Bet in July 2015, contains instructions for followers on how to evade intelligence tracking and how to avoid leaving behind forensic trails. It calls for the setting up of small cells across the country, made up of three to five operatives each, who would begin carrying out acts of violence. The document also contains detailed, practical instructions on how to commit sabotage and arson attacks using Molotov cocktails.“The Kingdom of Malice” tells followers how to torch cars, mosques and homes, with inhabitants inside, and how to carry out acts of heinous murder, officials said earlier this year.