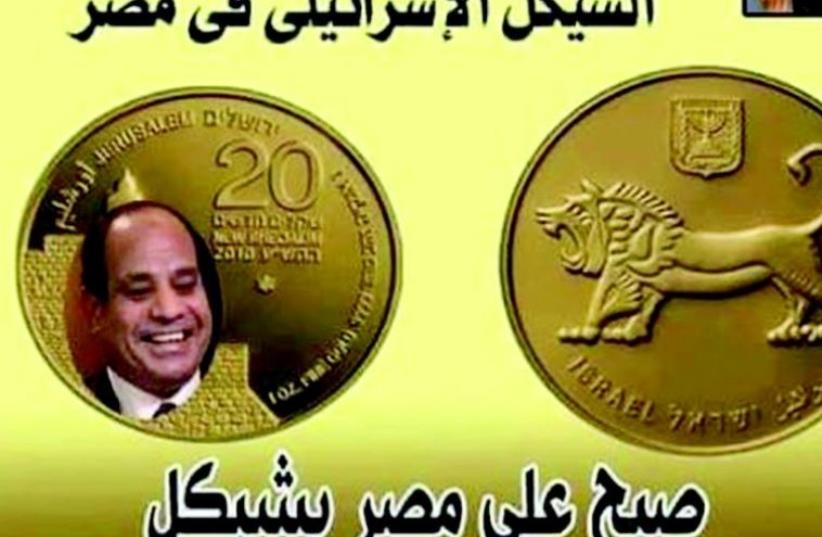 Protesters' mock up of Israeli coin with image of Egyptian President Abdel Fattah al-Sisi
(photo credit: ARAB SOCIAL MEDIA)
Advertisement
Egyptian President Abdel Fattah al-Sisi faced stinging criticism from his opponents over the weekend over his alleged normalization of ties with the Jewish State. It all started when Sisi made a speech in which he asked each Egyptian to donate one lira to the state every morning in order to help it get out of its economic woes. The Sisi appeal garnered widespread support on social media but his opposition attacked him and called him a "beggar and not a leader."  The attack on Sisi came days after another scandal in Egypt in which a major Egyptian Bank, Banque Misr, publicized the Israeli shekel exchange rate with Egypt's lira. For millions of Egyptians, this act, by a state owned bank, was viewed as another unacceptable marker of the normalization of relations with Israel.        At the beginning of the month, an Egyptian Member of Parliament was ousted from his position after meeting with the Israeli ambassador to Egypt.   The publication of the shekel exchange led Sisi's opponents, especially on Muslim Brotherhood affiliated websites, to slam the Egyptian president. "Apparently the failed military regime has found a magical solution to get out of its dark economic whole, by way of the Zionist exchange," the Muslim Brotherhood wrote on its site. Sisi banned the group in 2014 and jailed thousands of its followers.  "This move comes after all of the attempts to stop the devaluation of the lira against the US dollar and the crash of the stock market failed," the group added. The Brotherhood noted that the bank published the exchange rate even though Egypt's Central Bank prohibited the use of the "occupation's currency" in Egyptian banks. The group said publication of the exchange rate was evidence of the extent of cooperation between Sisi's regime and the "Zionist entity," relations that the brotherhood characterized as "warm and unprecedented in the areas of security, diplomacy, intelligence and now the economy."   A mock-up image circulated on social media in Egypt of an Israeli coin with Sisi's face on the currency.  Zaki al-Ranimi, an advisor to Egypt's Central Bank, said Sisi had no connection to the publication of the exchange rate and emphasized the bank's prohibition on use of the shekel.