Slain soldier’s father: 'I never imagined I would say kaddish for you'

Family mourns Capt. (res.) Eliav Gelman, 30, who was killed Wednesday by friendly fire in the midst of a terror attack at the Gush Etzion junction in the West Bank. 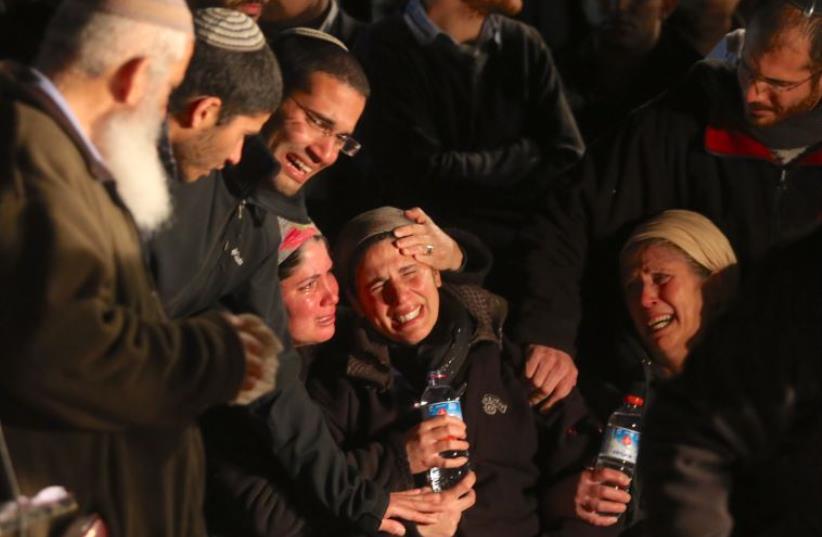 Funeral of Capt. (res.) Eliav Gelman
(photo credit: MARC ISRAEL SELLEM/THE JERUSALEM POST)
Advertisement
David Gelman never thought he would find himself reciting the mourner’s prayer for his son.On Wednesday night he did so in a voice filled with tears as he stood by the freshly covered grave of his son, Eliav, 30, who had been killed that afternoon by friendly fire in the midst of a terrorist attack at the Gush Etzion junction in the West Bank.Under a clear sky in the small Kfar Etzion Cemetery he recalled for the hundreds of mourners who surrounded him how, as an only son, he had said the same prayer for his father.At the time, David had noted to his cousin, Shlomo, that as a father of four boys he was guaranteed to have a chorus of people who could say the prayer for him when he died.Now, to his deceased son, Eliav, he said, “I never imagined that I would be your choir [in the recitation of Kaddish].”Eliav, a paratrooper captain who had fought in Gaza in 2014 and left the army earlier that year, was on reserve duty at the junction when a Palestinian terrorist attempted to stab him at a bus stop.Soldiers at the junction shot at the terrorist, and Eliav himself drew his weapon, but one of their bullets struck him in the heart, killing him. The assailant, a 26-year-old math teacher from the Hebron area named Mamdouh Tousef Amru, is recovering from his wounds in Jerusalem’s Shaare Zedek Medical Center.At the funeral David addressed his son’s grave.“Eliav, you join today the long line of people who sanctified themselves in God’s name without thinking of the moment after. Our forefather, Abraham, was willing to sacrifice his son for God. Aaron, the priest, lost two of his sons.“With great pain, we accept the decree that we were selected to make a sacrifice to sanctify God. Our mission is to continue to sanctify God’s name in spite of the hardships that we are enduring. Eliav, I believe that the quiet that so defined you, [won’t mask] who you were or what you did in your short rich life,” David said.
(Capt. (res.) Eliav Gelman, Credit: Courtesy)Eyal said that his younger brother, Eliav, was not the first member of their family to have fallen in battle. His brother-in-law, Maj. Benaya Sarel, was killed in Gaza in 2014.“As a chief security officer I deal a lot with death. Benaya, whom we loved so much, fell in Operation Protective Edge. Once again we are paying the price,” he said.When it came to his own brothers, all of whom have served in the army, Eyal said, “I always wondered in my heart, who among us would fall?” “I knew that everyone was greater than I was. But now I know that you [Eliav], were the greatest of them all.”“Eliav, you prayed every morning at sunrise. With your free moments during the day and night you studied Torah. You were connected to your forefathers, to this nation and its Torah. You excelled in what ever you did and you gave your utmost, as a brother, as a friend, in the army, in the yeshiva and as the head of a family.”He recalled, how his brother who lived in the nearby Karmei Tzur settlement had loved his two young boys and his wife Rinat, who is seven months pregnant. “You were not afraid of death. You always worried about your family. In the last months you were able to spend a lot of time with your children after years of arduous and demanding service,” Eyal said.Life will move forward, Eyal told the mourners. “The sun will rise again tomorrow in the morning with its bright light.”“But what will happen now? Who will take Yoav to synagogue? Who will be with [your wife] Rinat during the birth? In a month-and-a-half your baby will be born. The baby will be the flesh of your flesh but will never receive a hug from you.”“Rinat, how the hero we loved has fallen,” Eyal said.Eliav’s younger brother, Itamar, said, “What didn’t I learn from you? You were my role model. I always wanted to be like you.”His sister, Sophia, said, “Just your name calms me down. You had this inner peace and contentment that was hard to missed. I always wanted to build a home that was as filled with contentment and warmth as you were.”“Just yesterday you called to help me with my studies and you didn’t hang up until you were certain that I really understood." “A while ago I started to crochet a skullcap (kippa) for you. It was supposed to be a present for when you left the army, but I was never able to finish it. I wanted it to be as perfect as you were,” she said.“I love you very much,” Sophia added.

(David Gelman recites the 'Kaddish' at the funeral for his son Eliav, Credit: Marc Israel Sellem)