By DANIEL K. EISENBUD
JUNE 21, 2015 10:53
Stabbing attack near Damascus Gate
Advertisement
Hopes for a peaceful Ramadan were rebuffed with violence for the second time in less than 48 hours on Sunday morning, when a Palestinian stabbed a border policeman in the neck near Jerusalem’s Damascus Gate.The officer was critically wounded.The stabbing comes after a deadly Friday shooting by a Palestinian terrorist in the West Bank, which killed 25-year-old Danny Gonen, who was buried in the Lod Cemetery on Saturday night. 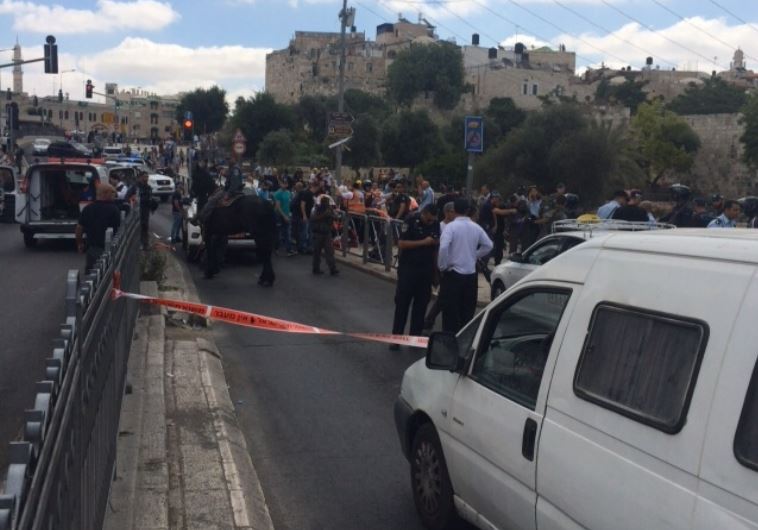 Scene of stabbing attack near Damascus Gate (Photo: Itzik Cohen)Sunday’s attack occurred shortly after 10 a.m., while the officer was stationed at the Old City’s northern entrance where tens of thousands of Muslims have passed through for Ramadan, which commenced last week.“The terrorist, who is 20 years old and from Hebron, stabbed him from behind in the neck, critically wounding the officer, who drew his pistol and was able to shoot him,” said Police spokesman Micky Rosenfeld shortly after the attack. 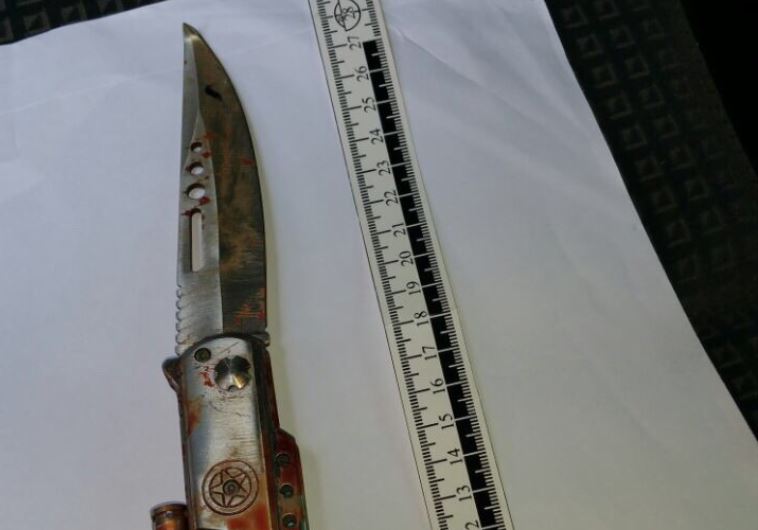 The knife used in a stabbing attack near Damascus Gate. (Photo: Israel Police)The officer, who was treated at the scene by Magen David Adom paramedics, was then rushed to Shaare Zedek Medical Center where he underwent emergency surgery, and has been upgraded to serious-but-stable condition, Rosenfeld said.The terrorist was transferred to Hadassah University Medical Center in Ein Kerem in serious condition.Rosenfeld said police units immediately cordoned off the area to prevent more attacks, before confirming that the suspect acted alone.“Police determined it was a lonewolf attack, and carried out security assessments in and around the Old City to ensure order was restored and no more incidents take place as Ramadan continues,” he said. “A joint investigation with the Shin Bet [Israel Security Agency] into how the terrorist came from Hebron to Jerusalem to carry out the attack has been launched.”Shortly after the attack, Jerusalem Mayor Nir Barkat issued a statement condemning the violence and praising the officer’s quick response.“I want to commend the action of the border policeman, who, while injured, kept his cool and shot and neutralized the terrorist, thus saving lives and preventing further injuries,” Barkat said. “We all pray for his recovery.”Noting that the goal of terrorists is to disrupt lives and spread fear, Barkat defiantly called upon all Israelis to visit Jerusalem.“We must persist and continue our daily routines,” the mayor continued.“I ask all the citizens of Israel to continue to visit Jerusalem and strengthen it.”The latest terrorist attack was followed by a rapid succession of statements from politicians who condemned the spike in violence, demanding greater security.Yesh Atid faction chairman MK Ofer Shelah said the confluence of violence highlights “the deterioration in the daily security of Israeli citizens.”“Since the establishment of the government, hardly a day goes by without a security incident,” Shelah wrote, noting the attacks as well as recent unrest in Gaza and on the Golan Heights.He went on to criticize Prime Minister Benjamin Netanyahu for not convening an emergency cabinet meeting to address the violence.Meanwhile, former foreign minister Avigdor Liberman (Yisrael Beytenu) said the situation is the result of Palestinian incitement coupled by Israeli inaction.“The series of terrorist acts we are witnessing in recent times... are the result of a combination of incitement by the Palestinian Authority and inaction and weakness exuded by the Israeli government,” he said.Liberman added that the government must take “practical steps” to ensure the security of Israeli citizens, “primarily through aggressive action against Hamas in Gaza as well as in the West Bank.”Zionist Union leader Isaac Herzog, who is in London for a series of pro-Israel events, said more must be done to contain not only terrorism but the cycle of violence it engenders.“Despicable terrorists and their dispatchers continue to escalate the violence; the same hate-mongering terrorists that we need to pursue and punish to the fullest,” he wrote on his Facebook page.While Herzog said that he continues to vigorously defend Israel’s ongoing security concerns to a plethora of politicians, diplomats, officials and student leaders abroad, he added that the Israeli government must also think long term to break the never-ending cycle of violence.“We have to think beyond the pain and anger,” he wrote. “We must understand the reality of what we want for ourselves and for our children.In order to make a change and bring hope to the region, we must break the cycle of reactions and be proactive – to bring something new to the table and demand international support for measures that paralyze terrorism and create a new political horizon at the same time.”In the meantime, a spokesman for Public Security Minister Gilad Erdan issued a statement saying that he has instructed Insp.-Gen. Yohanan Danino to heighten security throughout the capital.“The minister instructed the police to operate at the highest levels in order to increase the sense of security in Jerusalem, especially during Ramadan,” the statement said, before praising the Border Police officer who neutralized the terrorist.“Minister Erdan praises the officer, who despite sustaining severe injuries, fired at the terrorist and thus prevented him from doing more harm to others,” it continued, adding that he is praying for the officer’s recovery.Netanyahu and Defense Minister Moshe Ya’alon announced Sunday night the cancellation of entry permits to Israel to the residents of the village near Hebron from which the terrorist set out from, as well as the revocation of 500 exit permits abroad from Ben-Gurion Airport to residents of the West Bank.Lahav Harkov contributed to this report.