Some of the defendants also charged with previously throwing Molotov cocktails. 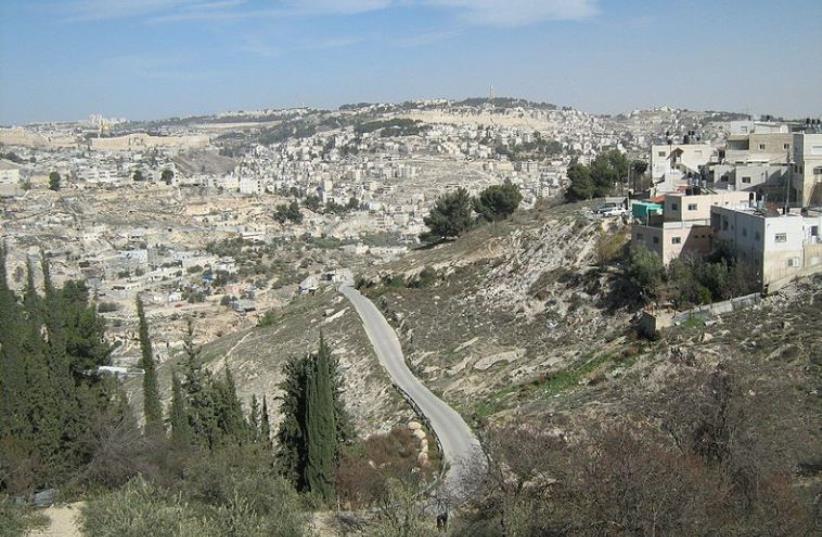 View of the southeast Jerusalem neighborhood Armon Hanatziv
(photo credit: Wikimedia Commons)
Advertisement
The Jerusalem District Attorney’s Office on Thursday filed indictments charging five residents of Sur Bahir with the killing of Alexander Levlovitz and the wounding of his daughters on the eve of Rosh Hashana.Abd Du’iyat, 19, Muhammad Abu Chaf, 18, Alulid Atrash, 18, and two minors aged 17 (whose names are under gag order), were charged with a combination of manslaughter, causing serious bodily harm, endangering lives on a roadway, disturbing police under aggravated circumstances, incitement, and constructing a weapon.Some of the defendants were also charged with throwing firebombs at security forces during rioting in 2014.Levlovitz, 64, lost control of his car on Rosh Hashana Eve after it was struck by rocks thrown by the defendants on Asher Viner Street in the Armon Hanatziv neighborhood of the capital, adjacent to the Arab neighborhood of Sur Bahir, while driving home from dinner, said the indictment.According to police spokesman Micky Rosenfeld, several rocks were thrown at the vehicle at approximately 11 p.m.“As a result, the man lost control of the car and was critically injured when it struck a tree,” Rosenfeld said, adding that Levlovitz’s daughters, both in their 20s, were lightly wounded in the collision.“Magen David Adom first responders and police quickly arrived at the scene, where the three were rushed to Hadassah- University Medical Center in Ein Kerem, and unfortunately Levlovitz died of multiple wounds shortly after,” Rosenfeld said.The lesser charge of manslaughter was imposed since the prosecution did not determine that the victim’s death was the premeditated intent of the rock throwers. While a murder charge would have required proof of the specific intent to murder using the rocks, the manslaughter charge refers to a more general intent to hurt the victims, without necessarily intending they would die.Rock attacks have become endemic in east Jerusalem neighborhoods such as A-Tur, Isawiya, Silwan and Shuafat, where Arab boys routinely target Jewish vehicles.Daniel K. Eisenbud contributed to this story.