The original plan was to demolish the synagogue, located in a settlement just outside of Jerusalem. 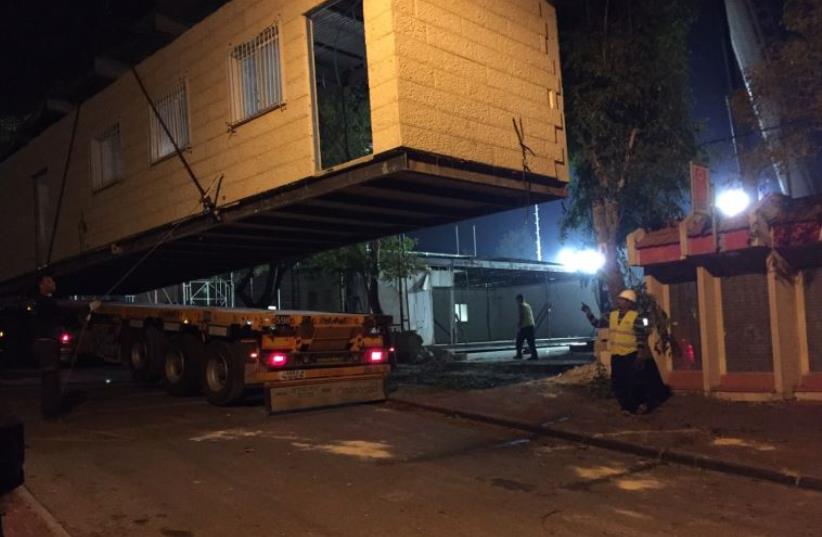 A temporary structure outside the controversial Givat Ze'ev synagogue being lifted onto a truck to be moved to a nearby public space
(photo credit: DEFENSE MINISTRY)
Advertisement
The High Court of Justice on Tuesday morning partially accepted the state’s offer to spend NIS 5 million to relocate Givat Ze’ev synagogue Ayelet HaShachar, rather than forcibly demolish the one-story stone structure located on private Palestinian property.As an initial step toward that move, it agreed that the building did not have to be razed on Wednesday.Instead it mandated that all religious items and furniture be removed from the structure by 3 p.m. on Thursday. It added that work must already be underway at that point to move the building.Police were also ordered to guard the building for the next couple of days.Once the state and the Givat Ze’ev group meet that deadline, the court is expected to issue a final ruling on the matter. The Defense Ministry has already moved a temporary structure that the community can use as an interim synagogue to nearby public space.The initial judgment appears to end the possibility of a violent clash between Border Police and activists intent on preventing the synagogue’s destruction.Earlier this month, hundreds of activists camped out in the synagogue and barricaded its entrances, fearing an imminent demolition.But concerned about possible post-demolition “price tag” activities in which extremists would commit revenge attacks, security experts warned Prime Minister Benjamin Netanyahu about the possibility of bloodshed – particularly at a time of heightened violence between Palestinians and Israelis.Many soldiers have registered their disapproval of the move on Facebook page called “I too, won’t destroy a synagogue,” which had received 2,151 likes by Tuesday night.Soldiers posted photos of themselves with signs covering their faces making clear their opposition to such a move.On Sunday Netanyahu held meetings with security experts and representatives from Givat Ze’ev as well as its council head Yossi Avraham.Education Minister Naftali Bennett [Bayit Yehudi], Justice Minister Ayelet Shaked [Bayit Yehudi], Minister of the Development of the Negev and Galilee Arye Deri [Shas] and Defense Minister Moshe Ya’alon [Likud] also participated in the meetings.The battle over the synagogue began seven years ago when the non-governmental organization Yesh Din petitioned the High Court of Justice after it was discovered that documents relating to the purchase of its property from Palestinian land owners were forged. In 2014, a court ordered the synagogue destroyed.The community of worshipers who have used the synagogue for the past two decades were not directly involved in the purchase of the property and have spent the last year fighting to save the synagogue.The justices already accepted a number of delays since the initial ruling to raze the synagogue last summer. First, the demolition deadline was delayed because of the High Holiday season. It was put off again so as not to divert the attention security forces who were combating a wave of Palestinian terrorism that began on October 1. The court granted an additional extension after police said they feared revenge attacks by Jewish extremists.On Tuesday, Rabah Allatif, heir of the initial Palestinian landowners, said that he would accept the relocation plan, but asked the court to ensure that the fence around the property is removed within a week after the synagogue is moved and access to the land is ensured.Located just outside of Jerusalem to the north, Givat Ze’ev has a population of almost 15,000 and is the fifth-largest West Bank settlement.