Statue of Nelson Mandela to be erected in Ramallah

The six meter statue, which is the first of its kind outside South Africa, is a gift from the Johannesburg Municipality to its twin city, Ramallah. 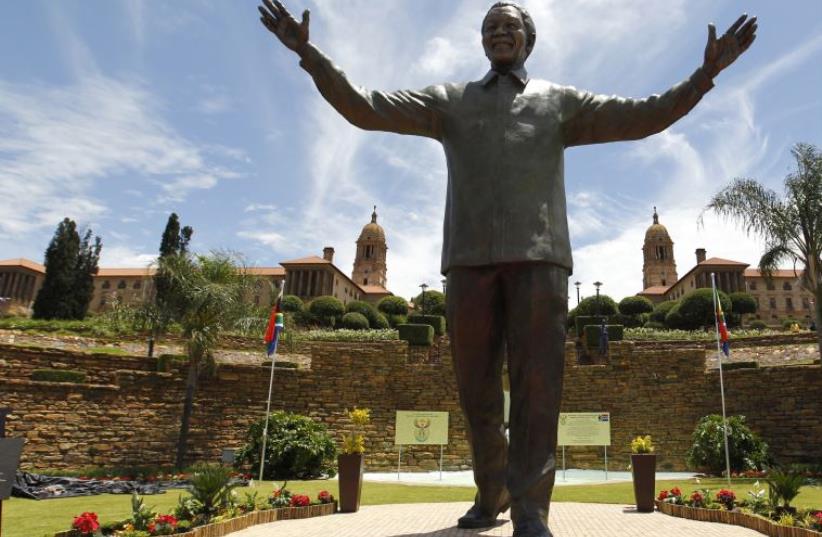 A bronze statue of the late former South African President Nelson Mandela, Pretoria
(photo credit: REUTERS)
Advertisement
A bronze-made sculpture of Nelson Mandela, the first black president of South Africa, will be erected in a Ramallah square that will be called after the late leader, the Palestinian media network, Raya, reported Thursday.The six meter statue, which is the first of its kind outside South Africa, is a gift from the Johannesburg Municipality to its twin city, Ramallah. The statue's erection ceremony was scheduled to take place next Tuesday.Ramallah's Mayor, Musa Hadid, told the Palestinian news site: "Ramallah is preparing to receive the sculpture of Mandela, making him our ambassador for freedom and justice. His character tells us that the chains that were once broken by Mandela will be broken by our prisoners.""The erection of Mandela's sculpture in Ramallah carries a symbolic significance, since he was an international symbol of peace and a torch to people striving for freedom and liberty," Hadid said.According to Hadid, Mandela was also a staunch supporter of the Palestinian issue, and he declared that "We know very well that we are not having complete freedom as long as Palestinians are not free.""The square bearing Mandela's name will become a major tourist attraction in Ramallah, just like his similar statue in Johannesburg is one of the most-visited tourist attractions in the city," Ramallah's mayor added.