Investigators found “pictures of ISIS members taken in locations around the world” on phone belonging to perpetrator of February 7 stabbing. 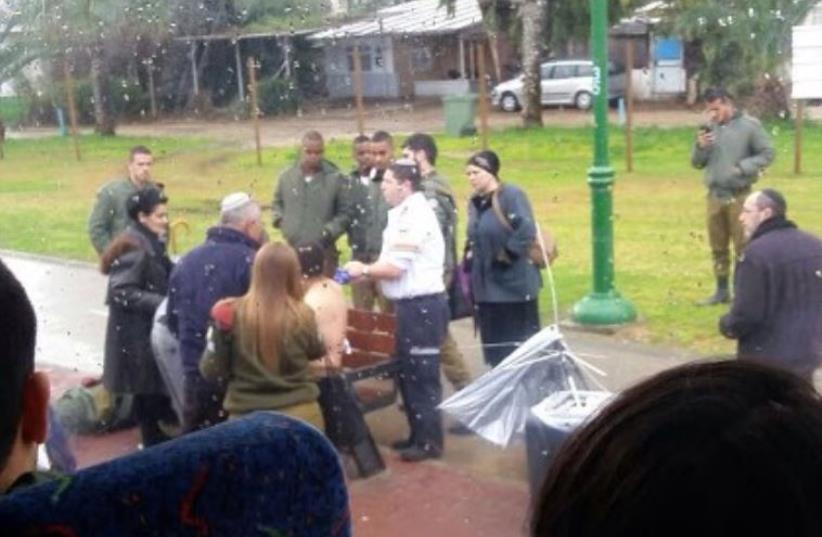 Soldier lightly wounded near central bus station in Ashkelon.
(photo credit: COL HA-ULAM COLO)
Advertisement
A Sudanese national who stabbed and lightly wounded a soldier in Ashkelon earlier this month was a devout Muslim influenced by Islamic State ideology, the Shin Bet said Thursday.Kamel Hasan, 32, carried out the attack “after he was influenced by Islamic State,” and on his cellphone investigators found “pictures of Islamic State members taken in locations around the world,” the Shin Bet (Israel Security Agency) said.The announcement was made on Thursday after the Shin Bet and police finished their investigation.Hasan had previously been arrested in 2009 on suspicion of carrying out a violent crime, the Shin Bet said, adding that he had been living in Ashdod and Ashkelon ever since he fled the Holot detention center for illegal migrants in the Negev in 2014.On February 7, a soldier was waiting at a bus stop at the entrance to the Neot Ashkelon neighborhood in the southern city when he was stabbed by Hasan, who then fled the scene on foot. Another soldier grabbed the wounded soldier’s rifle and gave chase, pursuing Hasan deep into the neighborhood.After a few blocks he managed to shoot Hasan twice, and then he and two other civilians held him until police could apprehend him.Hassan died later that day in Barzilai Medical Center in Ashkelon and was not questioned by investigators.News of the stabbing was met with shock and disbelief by members of the African asylum- seekers community, who issued their condemnation of the act of violence.Speaking to The Jerusalem Post the day after the attack, activist Mutasim Ali of Darfur, said “this was not a nationalist act, this was a case of a man who was mentally disturbed and did not receive treatment. He had no political agenda and certainly did not represent our community as a whole.”Ali said people who were jailed with Hasan in Holot said he showed signs of mental illness during his detention.