A spokesman for the PA government accused Israel of "deliberately" killing Palestinian teenagers. 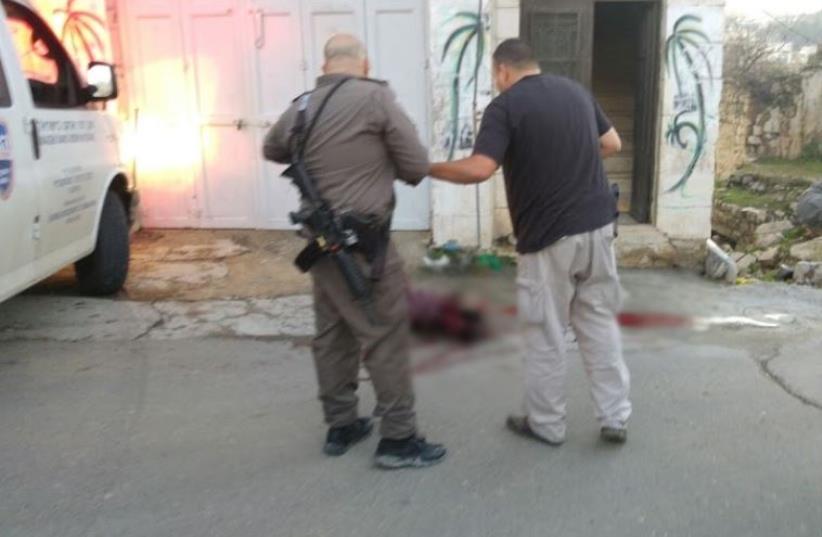 Scene of stabbing attack in Kiryat Arba
(photo credit: YISHAI FLEISHER/HEBRON JEWISH COMMUNITY SPOKESPERSON)
Advertisement
The Palestinian Authority called for international protection on Sunday after the IDF killed three teenage Palestinian assailants in the West Bank.Yusef Al-Mahmoud, spokesman for the PA government, accused Israel of "deliberately" killing Palestinian teenagers.An Israeli official responded by stating that “the problem is the Palestinian Authority, which continues to incite against Israel. It refuses to take responsibly and continues to praise young people involved in murderous acts of terrorism.”In the morning an IDF lookout position spotted two Palestinians hurling rocks near the security fence north of the Palestinian City of Jenin, near Arake village.An IDF unit deployed to the area came under fire. It crossed the security fence to the Palestinian side and fired at the two assailants, killing both of them. One was armed with an automatic rifle and the second with a knife, army sources said.“The unit acted to neutralize the immediate threat,” the Spokesman’s Office said.The two assailants, age 15, were Nihad Raed Waked and Fuad Marwan Waked.They were  from the village of Al-Araqa west of Jenin. Their bodes were later handed over to the Palestinian Red Crescent.Separately Naim Ahmed Safi, 17, from the village of Obaidiya near Bethlehem, was shot dead in the afternoon after charging Border Police officers with a knife at the Mizmoriya checkpoint close to Jerusalem’s Har Homa neighborhood.According to Police spokesman Micky Rosenfeld, at approximately 1:30 p.m. the 17-year-old suspect was spotted by a Border Police officer manning an observation point, who warned officers on the ground. “The terrorist ran toward police at the checkpoint with a knife, and when he did not stop Border Police opened fire and killed him,” he said, adding that none of the officers was wounded in the attempted attack.Palestinian medics say he was shot in the right side of the neck.In the West Bank city of Hebron near the Cave of the Patriarchs, Yasmin Rashad Tamimi, 21, a resident of that city, attempted to stab a soldier at Checkpoint 160.Security forces shot and seriously wounded her. She was evacuated to the Sha’are Tzedek Medical Center in Jerusalem, underwent surgery and was listed in stable condition.In Jerusalem round 3 p.m., Rosenfeld said police received an emergency phone call from a distressed woman in her 30’s who claimed an Arab man attempted to attack her with a knife in the southern Jerusalem neighborhood of Talpiot.“The woman said she fought the man off and fled the scene,” said Rosenfeld. “Police units immediately set up road blocks and searched for the suspect, but no arrests have been made.”The unidentified woman was not wounded in the alleged encounter, he said, and police continue to search for the suspect.