The terrorist came from the same town as the Beit Shemesh terrorists on Thursday. 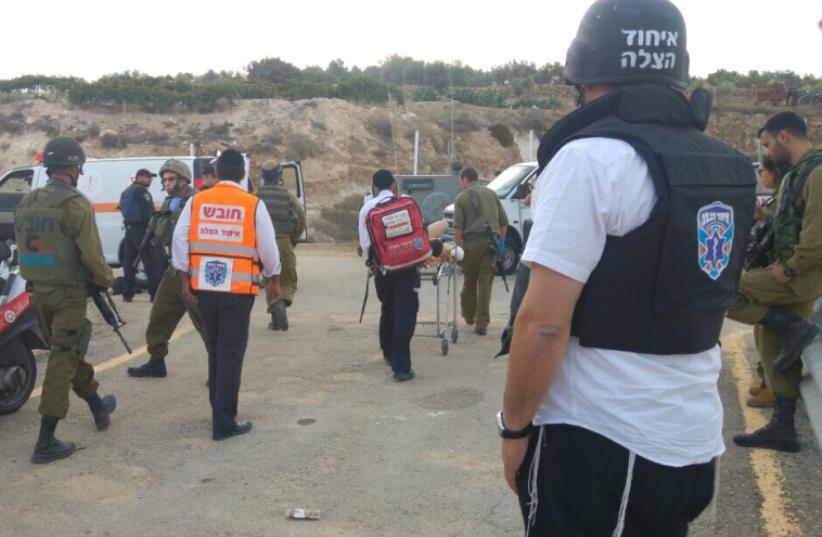 Emergency medical teams at terror scene in Gush Etzion
(photo credit: HAZALA)
Advertisement
An IDF soldier was stabbed and lightly wounded by a Palestinian attacker during operational activity near the Gush Etzion security fence, the IDF said.The attack took place near the community of Aderet, on the road between Gush Etzion and Beit Shemesh.Soldiers opened fire on the knife attacker, striking and wounding him in the lower half of his body. The terrorist was lightly wounded and taken to Hadassah University Medical Center in Jerusalem's Ein Kerem. Magen David Adom paramedics provided medical treatment and evacuated the soldier to the Shaare Zedek Medical Center in Jerusalem.It was reported that the terrorist, a 16-year-old youth, is a resident of Surif in the Hebron region and was a neighbor of the two terrorists who carried out the Thursday attack in Beit Shemesh. The attack comes one day after two Palestinians stabbed a young ultra-Orthodox man outside a Beit Shemesh synagogue on Thursday morning.Police shot the terrorists, killing one and seriously wounding his accomplice.The 18-year-old victim, whose named has not been released, is in satisfactory condition with stab wounds to his upper body at Jerusalem’s Hadassah-University Medical Center in Ein Kerem.According to eyewitnesses, the pair first attempted to board a school bus on Habakkuk Street in the Ramat Beit Shemesh Gimmel neighborhood, but the driver repelled them. They continued down to Yechezkel Street where they assaulted the young man outside the Kol Yehuda Synagogue, and were subsequently shot at a nearby bus stop.