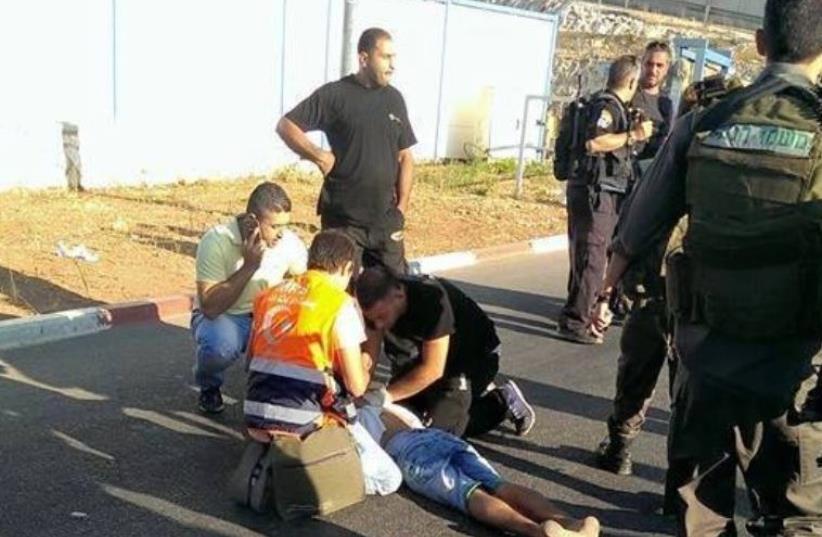 Suspect shot after attempting to run through Kalandia checkpoint
(photo credit: Courtesy)
Advertisement
A suspected 21-year-old terrorist was shot at the Kalandia Crossing security checkpoint separating Jerusalem from Ramallah on Tuesday evening, after ignoring warning shots and charging Border Police officers while shouting “Allah Akbar.”Police spokesman Micky Rosenfeld said the incident took place at approximately 6:30 p.m., when the unidentified man attempted to pass the checkpoint into Ramallah on foot through a lane designated for vehicles.“He walked into the area where vehicles go through and then shouted ‘Allah Akbar!’ at the officers stationed at Kalandia Crossing and charged them,” said Rosenfeld minutes after the shooting.“Warning shots were fired into the air, and the man was told to stop, but he continued to run toward the guards, and was shot.”Rosenfeld said the man was treated at the scene by Magen David Adom paramedics before being transferred to Shaare Zedek Medical Center in Jerusalem in moderate-to-serious condition for treatment.According to the hospital’s spokeswoman, Shohan Ruvio, the suspect arrived in the trauma unit some 15 minutes after being shot in the stomach, and is in moderate condition.“He’s here now and will have a CT scan soon to evaluate his injury,” said Ruvio. “After that, they will decide whether or not to operate on him.”Meanwhile, Rosenfeld said the area where the shooting took place was cordoned off as police investigate if the suspect acted alone or had accomplices.The shooting takes place one day after a female IDF Military Police officer sustained moderate- to-serious wounds after being stabbed in the neck at the south Jerusalem security checkpoint Rachel’s Crossing, in what police have deemed a terrorist attack.That attack took place a few minutes after 11 a.m. when the female suspect, identified as 20-year-old Misun Musa, a resident of Bethlehem, lunged at the 20-year-old officer, impaling her neck with the blade.The suspect was then detained and arrested after a brief chase.