In sign of improving ties, Israeli MK and Turkish official to appear publicly

Zionist Union lawmaker: It has been a long time since an MK appeared officially in Turkey 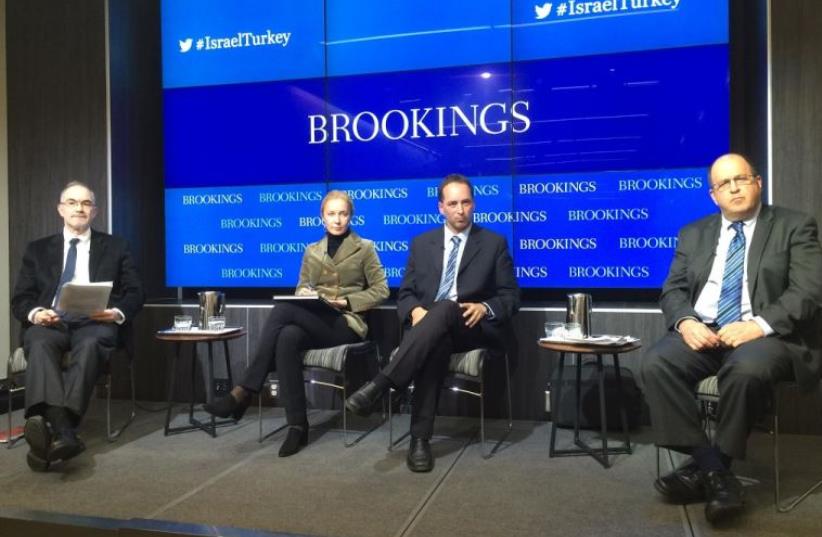 From left to right: Kemal Kirisci-Brookings Institution, Sylvia Tiryaki - GPoT Center, Nimrod Goren - Mitvim Institute, Dan Arbell - Brookings Institution
(photo credit: BROOKINGS INSTITUTION)
Advertisement
In a sign of improving government ties, an Israeli and a Turkish think tank are set to hold a joint event in Istanbul with an MK and a Turkish Foreign Ministry official.MK Ksenia Svetlova (Zionist Union), who is to participate in Friday’s session with Turkish Foreign Ministry official Mesut Ozcan, told The Jerusalem Post that “it has been a long time since an MK appeared officially and publicly in Turkey.”Svetlova said she is happy that the positive atmosphere allows such a meeting to take place in Turkey, and speculated that a deal on repaired relations between the two countries could come early next week.The event is the latest in a series since 2012 between the Ramat Gan-based Mitvim – The Israeli Institute for Regional Foreign Policies and the Global Political Trends Center (GPoT) at Istanbul Kültür University, and supported by Germany’s Friedrich Ebert Foundation.Dr. Nimrod Goren, head of the Mitvim Institute, told the Post that the continued meetings in Turkey, the US and Israel kept a channel open during times when the Turkish and Israeli governments were at loggerheads.Their meetings produced policy recommendations on how to improve relations and on regional development. When the Turkish experts were in Israel they met with Foreign Ministry officials and members of the Knesset, he noted The Israeli delegation in Turkey met with former Turkish diplomats.Muhammed Ammash, a researcher and project officer at GPoT, told the Post that from the Turkish point of view, “it is important to have stable allies in the region.”Higher level security cooperation could be resumed soon after a deal is reached, and after a period of confidence building there could even be a return to military cooperation.We both face the threat of terrorism in the region and border Syria, Ammash said.Svetlova said ways are needed to improve Israel-Turkey relations on the ground, and not only at the top level.Asked about those who oppose rapprochement because of the Islamist ideology of President Recep Tayyip Erdogan and his ruling AK Party, she responded that the Prime Minister’s Office supports it and that sometimes it is necessary to reach a deal even when there are fundamental disagreements.“It is not all black and white,” she said, adding, “I do wish to repair relations with Turkey, but not at any cost.”The MK said that she has not yet seen the draft of the agreement that is being negotiated between Ankara and Jerusalem.Goren said that former Turkish ambassador to Israel Ahmet Oguz Celikkol, who was humiliated six years ago when then-deputy foreign minister Danny Ayalon sat him on a low couch during a meeting broadcast on TV, is also expected to attend Friday’s meeting.Ayalon summoned Celikkol in January 2010 to protest against a Turkish television drama that portrayed Israeli diplomats as masterminds of a child abduction ring.Ayalon invited media crews to the beginning of the meeting in Jerusalem and pointed out there was no Turkish flag on the table. He also said he was deliberately avoiding a handshake with the ambassador.The goal is of the meeting in Istanbul is to examine what an Israel-Turkey agreement means for bilateral ties, regional dynamics, and Israeli- Palestinian relations, continued Goren. In addition, the meeting is designed to ensure that the agreement leads to diverse channels of cooperation between the countries.As an example he mentioned that a delegation from the Turkish Red Crescent Society was in Israel this week hosted by Magen David Adom.Asked about the chance of tensions flaring once again when there is another war between Israel and Hamas in the Gaza Strip, he replied that “differences will remain and particularly the Palestinian issue.”He said that during the first years of Erdogan’s term as prime minister, relations were better, though not without problems.Goren asserted that there is a linkage between Israel-Turkey relations and the peace process with the Palestinians, and that Israel can continue to expect criticism on this front as long as there is no progress.“Having an agreement is a major achievement, but it still requires successful implementation and constructive marketing to the public. The meeting in Istanbul is set to produce recommendations in this regard,” said Goren.Reuters contributed to this report.