The Golan Heights has recently seen a dramatic increase in spillover from battles in Syria, with eight mortar shells striking in the area in the the last month. 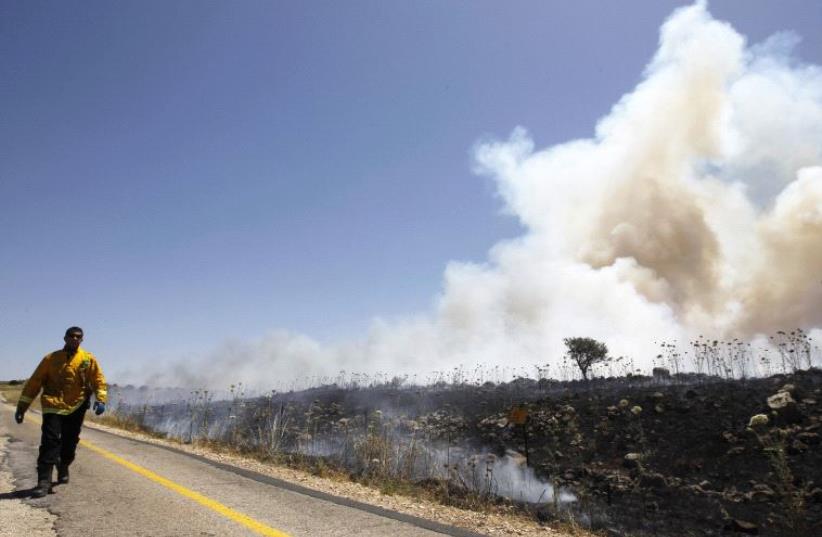 Mortar shells land on Golan Heights (Illustration)
(photo credit: AMMAR AWAD / REUTERS)
Advertisement
The Syrian army has sent additional forces to the city of Quneitra, on Syria's south west border, close to Israel's border, according to Iran's Fars News Agency.A source reportedly told Fars, "A large contingent of the fourth mechanized divisions, comprised of recent graduates from the Syrian Arab Army's Special Forces school in Deir Attiyah, have joined the 90th Brigade's headquarters in Golan Heights, where they will await orders to launch a large-scale offensive."The soldiers are reportedly being sent to take the city of Jabata al-Khashab, which was under rebel rule for the past two years. Last week the Syrian army engaged in heavy fire against rebel groups in the Quneitra area.The Golan Heights has recently seen a dramatic increase in spillover from battles in Syria, with eight mortar shells striking in the area in the the last month, prompting several Israel Air Force retaliatory strikes on Assad regime artillery.Earlier in September, tensions escalated after the Assad regime’s military fired two surface-to-air missiles at Israeli jets that were conducting a retaliatory strike. The IDF said the jets were far from the threats, and dismissed Syrian claims of a direct hit on Israeli aircraft.Yaakov Lappin contributed to this report.