Syrian Army forces confiscated Wednesday morning a vehicle that was coming from the Daraa eastern suburbs, on its way to ISIS forces, containing Israeli-made mines. 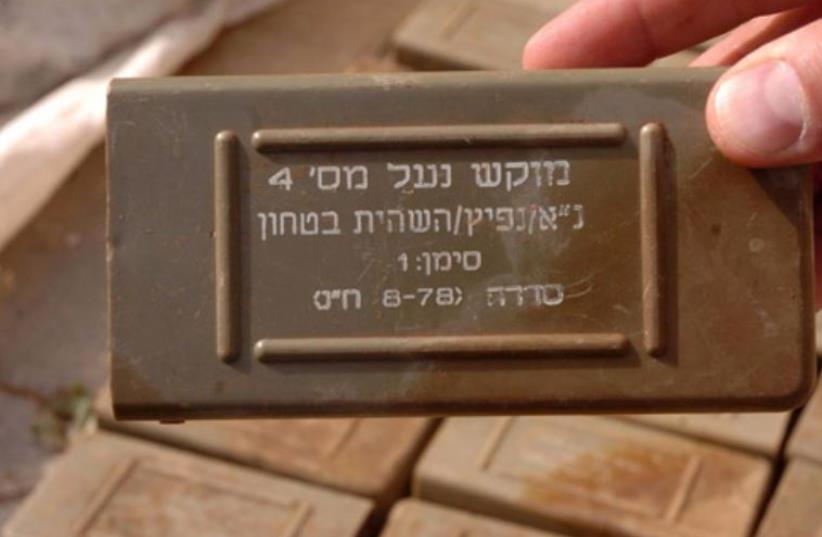 Israeli-made anti-personnel mine captured by the Syrian army
(photo credit: SYRIAN MEDIA)
Advertisement
Forces of the Syrian army in the southeastern governorate of al-Suweida seized Israeli-made weapons that were designated for ISIS, Syrian media reported on Wednesday.According to the reports, Syrian Army forces, in cooperation with local residents on the western outskirts of al-Suweida, confiscated Wednesday morning a vehicle that was coming from the Daraa eastern suburbs, on its way to ISIS forces in the eastern Syrian Desert.The vehicle was carrying Israeli-made mines with Hebrew writing on them, as well as mortars, RPG rockets and hand grenades. It was not immediately clear how the Israeli weapons got into the hands of those arming ISIS.A local source in al-Suweida said: "During operations aimed at tracking the movements of terrorist
organizations and their methods to transfer ammunition, a car that contained Israeli-made anti-personnel mines, several RPG rockets and launchers and mortars of different kinds was seized."According to the source, the terrorist driving the vehicle was “liquidated” by the Syrian forces.Located near Syria's border with Jordan, al-Suweida province is inhabited mainly by the Druse minority. In the last year, the governorate, which is known for siding with Assad, has witnessed escalating tensions after the assassination of Syrian Druse Sheikh Wahid al-Balous, a major anti-government leader.
Advertisement
Subscribe for our daily newsletter