Tank officer to ‘Post’: We can reach enemy in tunnels, homes, mountains 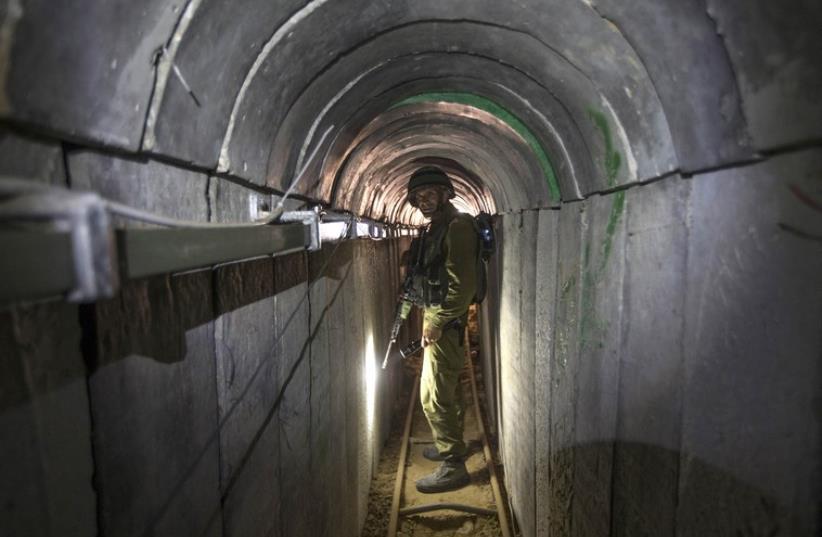 An Israeli army officer during an army organized tour for journalists in a tunnel said to be used by Palestinian terrorists for cross-border attacks
(photo credit: REUTERS)
Advertisement
The IDF’s 46th Armored Battalion, made up of Merkava Mk 4 tanks that are equipped with the Trophy active defense system, held a war exercise in recent days to prepare for conflict in a “northern arena,” officers from the battalion said.Capt. Nadav Cohen, a company commander in the battalion, told The Jerusalem Post that his tanks crews trained with the infantry, air force, and combat engineering units, from last Saturday until Wednesday, and that the drills occurred on the Golan Heights and in the Jordan Valley.Units rehearsed battle techniques on all levels, from the platoon-level to battalion-wide maneuvers, during the day, and at night. It incorporated frequent and sudden mission changes, the captain said.“We know where the enemy will wait for us. Those training us are adapting us to the enemy’s way of fighting. The great thing is combining all of the things we have trained for, and to be able to reach the enemy in tunnels, buildings or mountainous areas,” he said.“It was very challenging, and brought the battalion to a higher level of readiness. We drilled every type of combat, from a built-up area to fighting in hilly regions, from open to confined areas,” he said.The unit’s Trophy active protective system, produced by the Haifa-based Rafael Advanced Defense Systems, can intercept multiple incoming antitank missiles and rockets.It “makes us stronger,” Cohen said. “It is a defense system that makes us more offensive, and more effective. We can operate without worrying about various threats. It makes us stronger on the borders at any given time. It is an incredible system that has proven itself on a number of times during Operation Protective Edge.”Trophy played an important role in the tank company’s recent training, Cohen added.“It helped us build up scenarios and train for the enemy.”Cohen has been a company commander for 10 months, taking up his role immediately after Operation Protective Edge, where the battalion fought together with the Nahal Brigade in Beit Hanun, in the northeastern Gaza Strip.The unit, dubbed Company Gimmel, is named after a US unit it trained with several years ago, which was called “The Guy’s Unit,” Cohen added.Prior to the exercises, it spent six months on the Syrian border, carrying out tank-based and foot-based security missions. Before that, the unit was in the South, training. After it completes the current training session, the tanks and their crews will head back down to the Gaza border to conduct security patrols.“Our motto has been, for a few months, ‘Power through fire.’ This battalion can quickly take on any mission,” Cohen said.