The special security checks conducted by Israeli soldiers were part of a closure put on villages and access roads along the 60 Friday after Rabbi Michael Mark from Otniel was murdered. 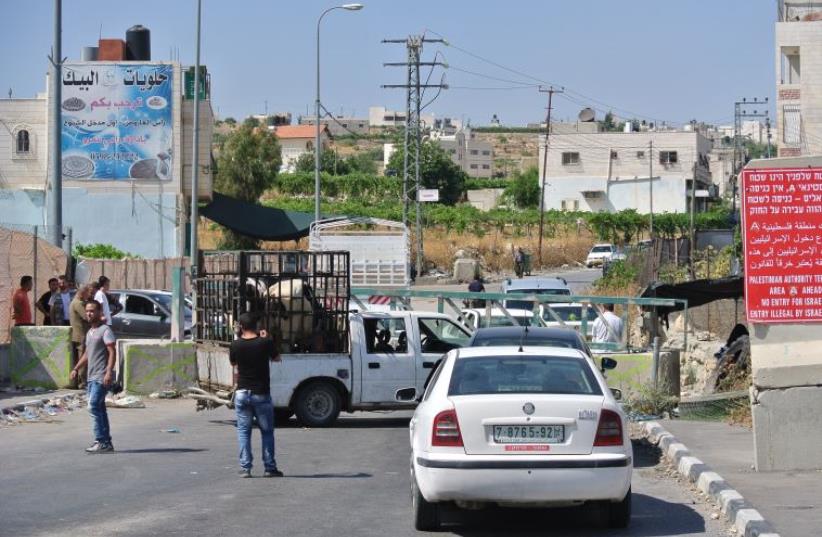 A blocked entrance from route 60 into Sa'ir, a Palestinian village. Men unloading a cow from one truck to another.
(photo credit: LAURA KELLY)
Advertisement
A bend along Route 60 near Beit Hagai leads to an overlook.There is a small concrete barrier, large enough for a soldier to stand in, nestled among the trees overlooking an intersection that leads to southern Hebron.Palestinians were waiting in a long line Monday to exit Hebron, home to almost 230,000 Arabs. One by one the cars and identifications of the drivers were checked by IDF soldiers.The special security checks were part of the closure put on villages and access roads along Route 60 on Friday after Rabbi Michael Mark from Otniel was murdered in a drive-by shooting not far from Beit Hagai.Route 60 is the main north-south road in the West Bank. From Gush Etzion it travels 49 kilometers to Otniel.This is the central artery for Jewish and Palestinian commuter traffic as well as commerce. It also has been witness to numerous terrorist attacks over the years.At Gush Etzion junction there is a sign commemorating Naftali Fraenkel, Gil-Ad Shaer and Eyal Yifrah, who were kidnapped and killed by Hamas in 2014. Their bodies were found near Halhul, not far from Route 60.Despite the closure affecting hundreds of thousands of Palestinians, there was not a massive visible security presence along the road on Monday.Many of the access roads have barriers that the IDF can close to prevent traffic entering or exiting villages like Shuyok and Sair.Local Palestinians said that there were large numbers of soldiers in areas near Bani Naim.The large town of almost 30,000 people was the home of Muhammad Tarayrah, the 17-year-old who murdered Hallel Yaffa Ariel in Kiryat Arba on June 30.The same town was home to a cell arrested in February of 2015 that carried out shooting attacks on Route 60.Palestinian residents inside Sair said that many people were not leaving the village due to the closure and that protesting the IDF presence is a waste of time. With Ramadan ending they hoped the situation would pass.An IDF spokeswoman said that the barriers restricting Palestinian traffic from the villages entering Route 60 would likely be lifted soon.However, the security checks on the vehicles and people will not necessarily.“It is dynamic and it is due to situational assessments,” she said. The IDF noted that two relatives of the murderer of Ariel had been detained in Bani Naim.Palestinian activists who had gathered at the entrance to Shuyuk village on Route 60 stood by a closed metal gate and filmed a cow being loaded from one truck to another.“For days they close this area, with 26,000 people here who want to leave to pray for Ramadan,” said one man.They said the locals who specialize in embroidery and marble work could not get to their shops and that ambulances had trouble entering the area and garbage was not being collected.