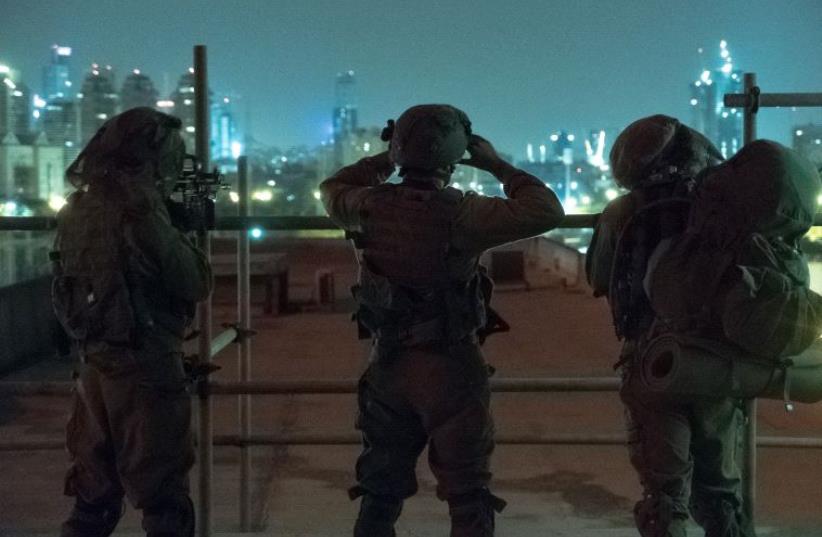 IDF soldiers.
(photo credit: IDF SPOKESPERSON'S UNIT)
Advertisement
The Shin Bet internal security service announced the arrest of a terror cell associated with the Islamic Movement that was planning a shooting attack against IDF soldiers in the south of Israel. According to the Shin Bet, the joint investigation with the Israel Police northern district which took place over the last few week exposed the involvement of terror elements in the banned northern branch of the Islamic Movement in Israel.The investigation found that the three cell members, who have had indictments filed against them, began to plot the attack in November in 2015 in retaliation for Israel’s decision to outlaw the movement. The cell members were identified as Israeli citizens Muhammad Masri of Rahat, Abdullah Abu Ayyash of Kuseife and Mahmoud Luisi of Qalansawe. According to the Shin Bet, Masri recruited Abu Ayyash who was asked to find a suitable location and vehicle for the attack.Throughout the year of 2016, they purchased a Carlo Gustav improvised submachine gun and electronic transmitters to set off improvised explosive devices from a safe distance, the Shin Bet stated.Kuseife and Masri were arrested in December 2016 while Luisi was arrested in March 2017 after he returned from visiting Turkey where he met with senior Hamas member Majid Abu Qatish who had been released as part of the prisoner exchange to release IDF soldier Gilat Shalit deal,  in order to secure funds for as well as training for the attack. Luisi’s arrest led to the renewal of the investigation and led to the arrest of a senior member of the Islamic Movement and former security officer of the head of the Islamic Movement Raed Salah, Faras al-Omari from Qandala who is said to be the person the cell members turned to in order to receive approval for carrying out the attack.Two other Israelis, residents of the Galilee, were arrested on suspicion of illegally selling weapons.The Shin Bet stated that the outlawed northern branch of the Islamic Movement continues to maintain close ties with Hamas and their joint ideological basis and close ties between members poses a “grave security risk,” emphasizing the role of former prisoners who continue to conspire to carry out terror activity