The shooting comes after Hamas called for a Palestinian "day of rage" after a toddler in the West Bank was killed by a suspected far-right Jewish terrorist. 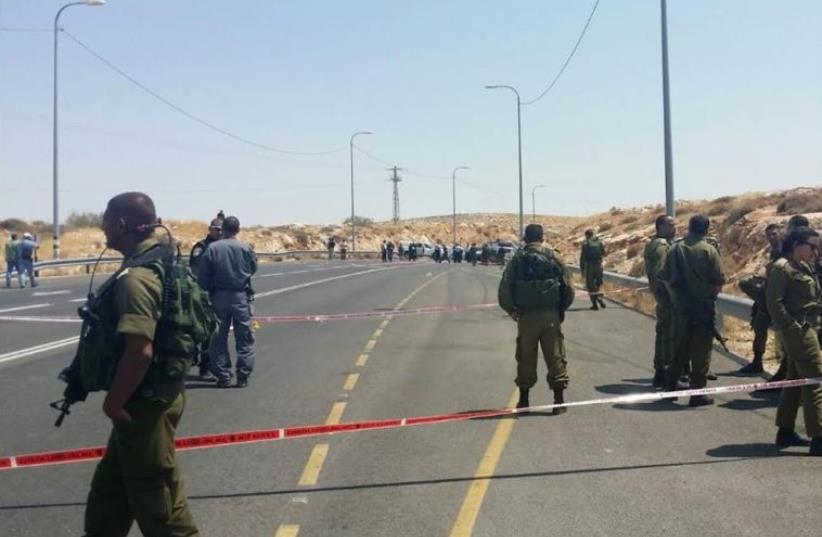 The closed-off road after an Israeli driver was fired at by a Palestinian driver near Kochav Hashahar
(photo credit: TAZPIT)
Advertisement
A suspected Palestinian terrorist carried out a drive-by shooting attack on an Israeli vehicle on Friday in the Binyamin region of the West Bank near Kochav Hashahar. The Israeli driver in the vehicle told the army he fired back at the gunman. There were no injuries in the incident. The army found three bullet holes in the Israeli vehicle that came under fire. A couple of hours later, Palestinian rioters clashed with IDF soldiers in Hebron. The incident occurred near the al-Rasoul Mosque, when Palestinians on a march hurled rocks and burning tires at security forces in the area. Soldiers responded with riot dispersal means, and fired Roger low intensity rounds at the legs of a suspect, an army spokeswoman said. He sustained a light injury, the spokeswoman added. The attack comes hours after Hamas said that every Israeli is now a legitimate target following the deadly terror attack in the village of Duma in which a Palestinian toddler was killed.In an official message to the public, Hamas also called for a "day of rage" to protest the deadly terror attack and "in order to protect al-Aksa mosque." Israeli and Palestinian security forces in Jerusalem and the West Bank were placed on high alert following the attack. A Palestinian security source told Israel Radio that Palestinian Authority police will be placed outside mosques in the area to maintain order, but added that there will be no way to prevent Hamas protests from taking place.