The terrorist approached the military outpost holding the bomb in his hand. 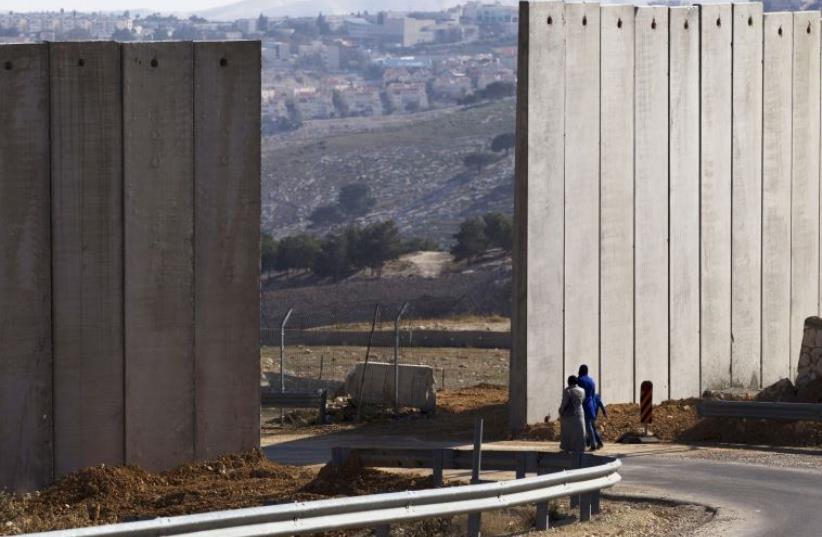 Palestinians walk near an opening in Israel's security fence in the east Jerusalem neighborhood of A-tur
(photo credit: REUTERS)
Advertisement
An 18-year-old male Palestinian died late Saturday night after a pipe bomb he intended to throw at Border Police officers stationed at a security checkpoint near Abu Dis, adjacent to Jerusalem, exploded in his hands.Police spokesman Micky Rosenfeld on Sunday said, “He had a pipe bomb that he was planning on throwing at security personnel in Abu Dis, and it accidentally exploded before he threw it, and he died of his wounds.”“He was not a suicide bomber,” Rosenfeld added, noting inaccurate media reports claiming the teen was wearing an explosive vest. “We’re talking about a Palestinian with a small explosive.”None of the officers were wounded in the explosion, he said.The body of the suspect, identified by Arab media as Muhammad Halbiya, was transferred by Palestinian Red Crescent paramedics to a nearby medical clinic.Last month, the Shin Bet (Israel Security Agency) arrested a large-scale Hamas terrorist cell based in the Abu Dis area that had been plotting bombings and suicide-bombing attacks in Israel and the territories. Twenty-five Hamas operatives were apprehended, most of them students at Al-Quds University in Abu Dis.Had the attacks not been thwarted, they could have led to mass-casualties and could have dangerously escalated the security situation, the Shin Bet warned after the arrests were made.During questioning, it emerged that the cell was led by Ahmed Azam, a 24-year-old Palestinian from the Kalkilya area, the Shin Bet said. Azam was recruited by Hamas in Gaza “to set up a military infrastructure that would carry out bombing attacks against Israeli targets,” the intelligence agency stated.Meanwhile hundreds attended on Sunday the funeral of a 13-year-old Palestinian girl who was shot dead by an Israeli security guard after she tried to stab him at a settlement in the West Bank.The fatal incident happened on Saturday, following two stabbings last week inside settlements carried out by Palestinian teenagers.Police spokeswoman Luba Samri said initial investigations showed the teenager killed on Saturday, Ruqayya Abu Eid, “had fought with her family and left her home with a knife and intending to die.”Holding a knife, she ran toward the security guard at the entrance to the Almon (Anatot) settlement, and he opened fire on her, Samri said.Ruqayya’s mother, Reeda Abu Eid, said there had been no trouble before her daughter left the family home, a tent in the Palestinian village Anata.Her funeral was held in Yatta village, near Hebron.Hours after the incident on Saturday, Palestinian President Mahmoud Abbas came out against Palestinian groups he said were encouraging youth to take part in an almost fourmonth long surge of violence with Israel.Many of the Palestinian assailants have been teenagers.Yaakov Lappin contributed to this report.