Last Thursday, the IDF said that a group of its reservists shot and killed three Palestinian who attempted to attack the soldiers with knives near the Gush Etzion junction. 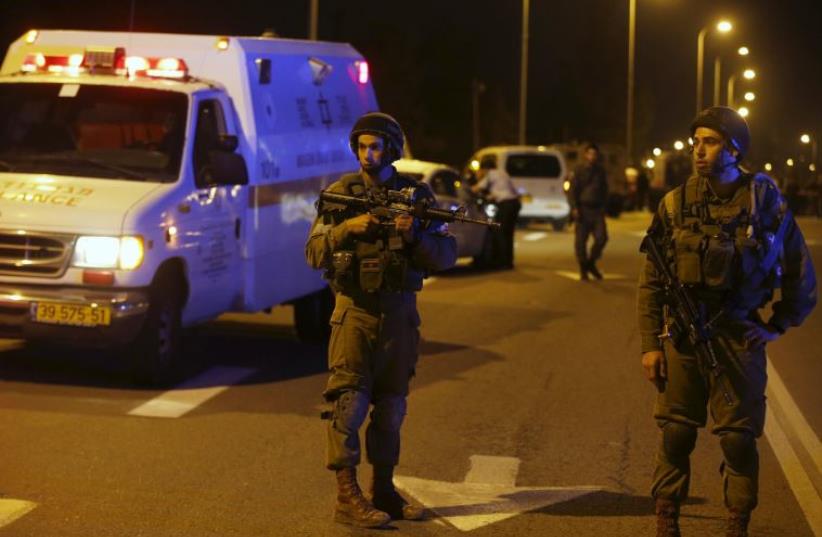 IDF soldiers near the scene of a Palestinian attack near the West Bank [File]
(photo credit: REUTERS)
Advertisement
The IDF on Tuesday killed three Palestinian assailants in the West Bank, two in the area of the South Hebron Hills and one near Bethlehem.In the afternoon a car arrived at the Beit Einoun junction and stopped close to a group of soldiers touring the area, according to the IDF.A Palestinian man got out of the car with a knife, an IDF spokesman said. Soldiers immediately shot the Palestinian and the driver of the vehicle, the IDF said adding that the driver was still able to flee the scene.The Beit Enoun junction is north east of the city of Hebron and near the villages of Al-Shayoukh and Sair. According to Palestinian sources the IDF killed Adnan Hamed Al-Halayka, 17, in that area. An hour later Palestinian sources reported that 23-year-old Mohamed Ahmed Al-Kawazba, from the town of Sair, had been shot and killed by the IDF soldiers.He is the fifth member of that family and that village to have been killed by the IDF in the last eight days.Last Thursday, the IDF said that a group of its reservists shot and killed three Palestinian who attempted to attack the soldiers with knives near the Gush Etzion junction. All three were members of Kawazba clan; Ahmed Salem Abdel Majid, 19, Ala Abed Mahmoud, 19, and Muhammad Ziad, 18.Two days earlier at the Gush Etzion junction an IDF soldiers shot and killed Ahmed Yusef Kawazba, 18 after he stabbed and lighted wounded an IDF reservist at a bus stop.Separately on Tuesday near the city of Bethlehem soldiers clashed with some 50 Palestinian rioters who threw Molotov cocktails and stones at the IDF. Soldiers responded with tear gas, rubber bullets and live ammunition. Srour Ahmed Ibrahim Abu Srour, 21, from the Aydah refugee camp near Bethlehem, was killed after being hit in the chest with a bullet.